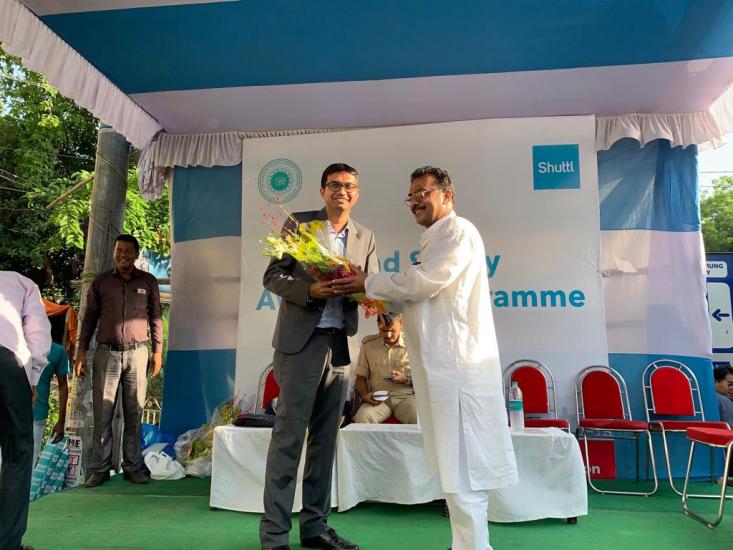 The programme was launched in association with Uttarpara Kotrung Municipal Corporation, Kolkata.

Prabir Ghosal, an MLA from West Bengal's Konnagar, launched the campaign by flagging off Shuttl’s three new buses at an event held in Uttarpara. These buses will ply in the Uttarpara Kotrung Municipality region.

With an aim to spread awareness about the increasing road accidents, Shuttl will extend this campaign to other regions and will organize the event in Hooghly on August 26 and in Kolkata on August 27. Shuttl has also teamed up with Civic Authorities and Traffic Police in Kolkata for this program to educate citizens and drivers on road safety, traffic rules, and driver-pedestrian best practices over the period.

Speaking on the occasion, Dilip Yadav, Chairman, Uttarpara Kotrung Municipal Corporation said, “The rising number of road accidents is an issue which Municipal Corporation takes very seriously. Better informed commuters ensure that safety on our roads improve. By raising awareness amongst the users of roads, we aim to ensure that the roads of our city are safe and comfortable for every citizen. We are happy to partner with Shuttl in helping us spread the message of SAFE DRIVE, SAFE LIFE”.

Commenting on the campaign, Veer Singh, Vice President, Trust and Safety for Shuttl said, “Road accidents is a major reason behind fatal deaths in the country, which is even more than natural calamities or terrorism. At Shuttl, road safety is our priority and as a responsible organization, we provide appropriate training sessions to our drivers. Most of the accidents occur due to non-compliance with the rules of the road and we endeavor to bring people’s attention towards this issue.

We are honored and humbled to be able to assist the Uttarpara Kotrung Municipal Corporation in this important mission in the best possible way we can and to address this alarming but often neglected issue. We also believe that much more needs to be done to raise awareness among citizens and a routinely frequent messaging on the buses and road safety awareness boards at various locations, will go a long way in doing so.”