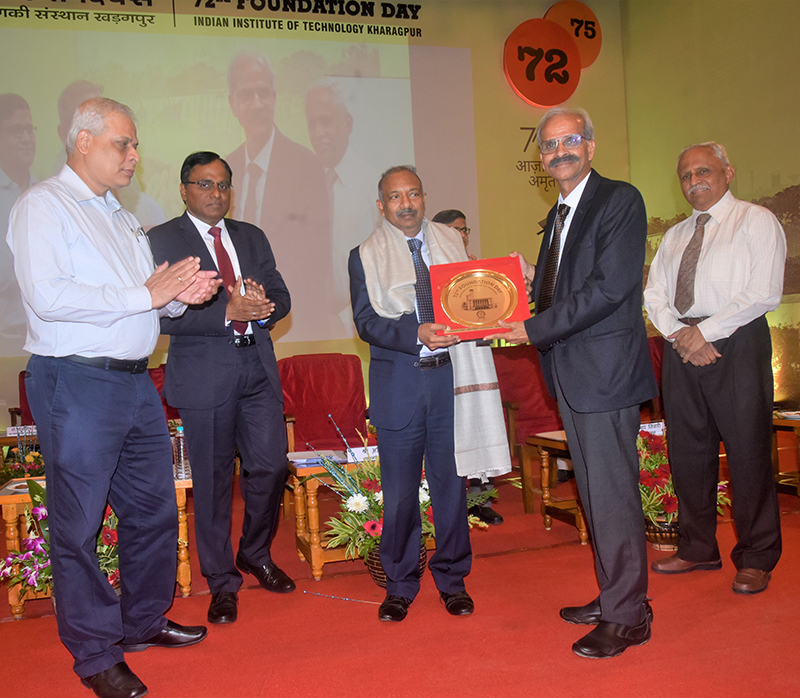 Kharagpur (WB)/IBNS: IIT Kharagpur, one of the premier institutions for education and research, situated in West Bengal, celebrated its 72nd year of foundation on August 18 this year.

Amit Khare, Adviser to Prime Minister and former Secretary - Higher Education, in the Union ministry, was the Chief Guest while Dr. B N Gangadhar, President, NMC, MA&RB (former director of NIMHANS) and Ranjit Rath, an alumnus of IIT Kharagpur and CMD, Oil India Limited were Guests of Honour.

The invocation started by hoisting the national flag and institute flag at the main building.

In his address, Amit Khare said, “The idea of the Gurukul that we had 1000 years ago is the same Gurukul with a modern outlook and new technology exists in IIT Kharagpur where you have all the faculty, staff, alumni and students working as a team to bring something new.”

Quoting Prime Minister Narendra Modi’s five visions for making India a developed nation he said that overall development of the youth will be an important focus area with NEP 2020 which is designed to ensure that every child is able to achieve whatever potential they might have.

He identified seven major areas in the context of NEP where IIT Kharagpur plays an important role.

Quoting Jai Jawan, Jai Kisan, Jai Vigyan and Jay Anusandhan, in Innovation & Research, he said, “We are an IT superpower but we need to be a superpower in Intellectual Property because knowledge is power. We cannot borrow technologies and indigenize them, we need institutions like Nalanda and Vikramshila. We have to be creator of that knowledge.”

Khare said that a multidisciplinary approach is essential as knowledge is created at the intersection of different disciplines and pointed out that it is the social responsibility of all institutions to collaborate with local institutions and help them by providing local development and technical assistance.

He concluded by saying that he hoped IIT Kharagpur would improve its rankings and the institute should develop niche areas of specialization to excel and be among the top 10 universities in the world.

This year a team of eight inventors from the Bhabha Atomic Research Centre bagged the Nina Saxena Excellence in Technology Award 2022 for their breakthrough technical innovation in Indigenous Development of Compact Alkaline Water Electrolyzer Technology for Simultaneous Production of High Purity Hydrogen and Oxygen from Laboratory to Industrial Scale.

This award has been instituted jointly by IIT Kharagpur and Dr. Akhil Sahai, an alumnus of the institute and the husband of late Dr. Nina Saxena.

The Distinguished Alumnus Award 2020 went to 86 year old Saripalle Satyamurthy, an alumnus from the second batch of IIT Kharagpur after its formation in 1951, whose presence at the event served as an inspiration to many.

Prof Virendra K Tewari, Director IIT Kharagpur said, “IIT Kharagpur supported the nation to excel the standards of globalization with domestic innovations, finest scientific research and affordable technologies that contribute for a self-reliant India. Seven niche areas consisting of Advanced Manufacturing Systems for Industry 4.0, Safety Engineering & Analytics, Quality and Reliability, Healthcare, Precision Agriculture & Food Nutrition, Smart Infrastructure and Advanced Transportation have been identified by the Institute that will drive its growth trajectory to become the top 10 universities in the world.”