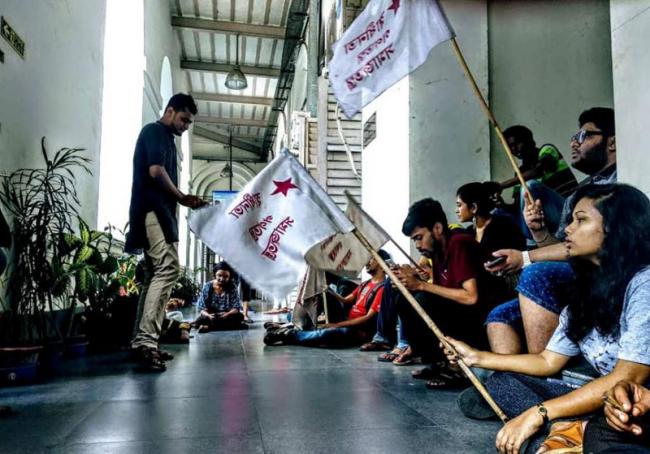 Kolkata, July 13 (IBNS): Protesting against the hike in university's admission counselling fee and demanding the publication of full merit list for admission in undergraduate courses, a large number of students of Kolkata's Presidency University have been agitating in front of institute's administrative office and gheraoing the officials of the university since Thursday afternoon.

As many as 42 officials of the university, including the registrar, four deans, controller of examinations, professors and other non-teaching staffers, have been gheraoed by the students for more than 26 hours.

According to reports, CPI-M's students' wing, Students' Federation of India (SFI), is leading the agitation while few other student organizations, including All India Students Association (AISA) and Presidency University's Independents Consolidation (IC), have joined the protest.

"This year, the fee for admission counselling has been hiked to 500 rupees which was just 100 rupees till last year and we are demanding a reduction in the hiked counselling fee as several talented students from poor families will also take part in the counselling process and paying a fee of 500 rupees would be tough for them," a protesting student-leader told IBNS.

"We are also demanding an immediate publication of full merit list that all aspirants come to know how many of them have qualified for the admission. This step would also reduce the chance of irregularities in the admission process," the student said.

"No merit list has been published so far when the first round of counselling will start from July 17," he added.

Meanwhile, university's registrar claimed that the counselling fee had been set by the state joint entrance board.

"As West Bengal Joint Entrance Examination Board (WBJEEB) conducts and controls the entrance tests for Presidency University, they have set the examination fee and counselling fee, the university did not," registrar of the institute, Debajyoti Konar, told IBNS.

He, however, denied to comment on the merit list issue while no reaction on the student protest has been received yet from university's vice-chancellor Anuradha Lohia.

Agitating students said that their sit-in-demonstration will be continued until their demands are fulfilled.

"We have been protesting for last 26 hours, but no official from the university has called us yet for a discussion," a student said. "Our protests will be strengthened in future."

The college authority is likely to hold an urgent meeting with the executive committee on Friday to discuss the matter, reports said.