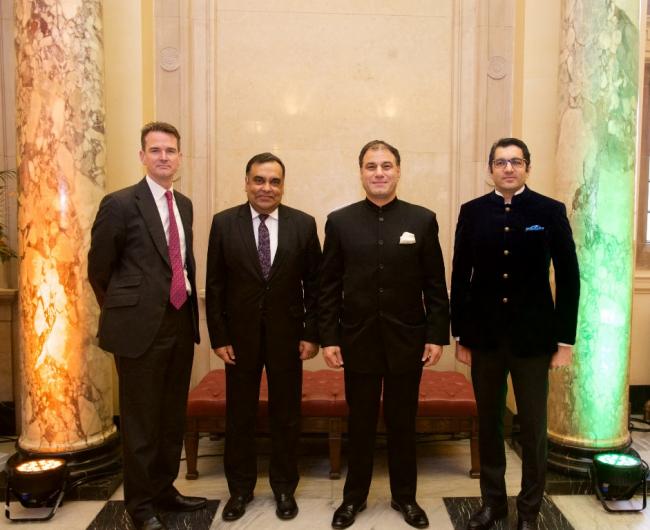 Birmingham, June 21 (IBNS): University of Birmingham’s Chancellor Lord Karan Bilimoria and Pro-Vice-Chancellor (International) Professor Robin Mason have been named as two of the most influential figures in UK-India relations.

Lord Bilimoria of Chelsea and Professor Mason were included in the India Inc. Top 100 – published as part of UK-India Week 2018 and listing key influencers across arts, culture, and media that help make the UK-India relationship so successful.

The list is a result of painstaking research collated by an expert editorial team, profiling influential people in the arts, culture, and media.

Indian-born Lord Bilimoria, Founder and Chairman of Cobra Beer, President of the UK Council for International Student Affairs and Founding Chairman of the UK-India Business Council, was named in the Top 100 in recognition of his influential role in politics and public life.

Professor Mason, who is also the Director of the University of Birmingham India Institute, was named in the Top 100 as a ‘Regional Tiger’: one of a number of ‘India enthusiasts’ who ensure Indian businesses look beyond London when considering the UK as an investment destination.

Lord Bilimoria commented: “This collection of influential individuals reflects the breadth and depth of engagement between Britain and India – an emerging global star which can no longer be overlooked. I am honoured to represent the University of Birmingham on this list and I will continue to advocate for ever closer ties with one of our most important global partners."

“India is a rising economic powerhouse thanks to the economic liberalisation started in the 1990s and continued under Prime Minister Narendra Modi, and every sector needs to continue the opportunities for growth in India. I am proud that the University of Birmingham, with its newly-launched India Institute, is working with our Indian partners to tackle some of the challenges that face our two countries, and the rest of the globe, in the 21st century,”said he.

Much of the University’s work with its Indian partners focusses on tackling a number of the 17 Global Goals identified by the United Nations to end poverty, protect the planet and ensure prosperity – all with specific targets to be achieved by 2030.

Professor Mason commented: “It’s an honour to be named in the Top 100. My inclusion also serves as recognition of the University of Birmingham’s deep and continued commitment to engagement with India and its people."

“We are a civic university with a global outlook, with a long-standing special bond between Birmingham and India. We created the University of Birmingham India Institute to celebrate and deepen the thriving partnerships that we have in India," said he.

“Whether through academic research and scholarship, teaching and postgraduate research, policy analysis and debate, collaboration with corporate partners, or public engagement in culture, the India Institute will maximise the impact of our work in India.”

He added that a UN Global Goal of particular focus at Birmingham is ‘Good Health and Well-being’, and one of the India Institute’s first initiatives was to host a workshop exploring ethnic diversity and the genetics of cancer.

Funded by the UK’s Medical Research Council, the workshop brought together scientists and clinicians from India, Africa and the UK to develop epidemiological, clinical and genomic research in three most common cancers in women of non-Caucasian ethnicity: breast, ovarian and uterine.