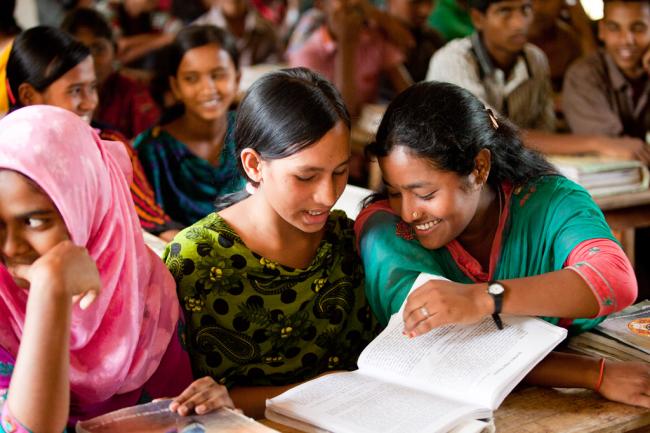 Jews are more highly educated than any other major religious group around the world, says study

At present, Jewish adults (ages 25 and older) have a global average of 13 years of formal schooling, compared with approximately nine years among Christians, eight years among Buddhists and six years among Muslims and Hindus. Religiously unaffiliated adults – those who describe their religion as atheist, agnostic or “nothing in particular” – have spent an average of nine years in school, a little less than Christian adults worldwide, the study finds.

These gaps in educational attainment are partly a function of where religious groups are concentrated throughout the world. For instance, the vast majority of the world’s Jews live in the United States and Israel – two economically developed countries with high levels of education overall. And low levels of attainment among Hindus reflect the fact that 98% of Hindu adults live in the developing countries of India, Nepal and Bangladesh.

But there also are important differences in educational attainment among religious groups living in the same region – and even the same country. In sub-Saharan Africa, for example, Christians generally have higher average levels of education than Muslims. Some social scientists have attributed this gap primarily to historical factors, including missionary activity during colonial times.

Drawing on census and survey data from 151 countries, the study also finds large gender gaps in educational attainment within some major world religions. For example, Muslim women around the globe have an average of 4.9 years of schooling, compared with 6.4 years among Muslim men. And formal education is especially low among Hindu women, who have 4.2 years of schooling on average, compared with 6.9 years among Hindu men.

Many of these disparities, however, appear to be decreasing over time. The religious groups with the lowest average levels of education – Muslims and Hindus – have made the biggest educational gains in recent generations. In addition, the gender gaps within some religions have diminished, according to Pew Research Center’s analysis.

The number of years of schooling attained by the average adult in all the religious groups studied has been rising in recent decades, with the greatest overall gains made by the groups that had lagged furthest behind. For instance, the youngest Hindu adults in the study (those born between 1976 and 1985) have spent an average of 7.1 years in school, nearly double the amount of schooling received by the oldest Hindus in the study (those born between 1936 and 1955). The youngest Muslims have made similar gains, receiving approximately three more years of schooling, on average, than their counterparts born a few decades earlier, as have the youngest Buddhists, who acquired 2.5 more years of schooling.

Over the same time frame, by contrast, Christians gained an average of just one year of schooling, and Jews recorded an average gain of less than half a year of additional schooling. Meanwhile, the youngest generation of religiously unaffiliated adults – sometimes called religious “nones” – in the study have gained so much ground (2.9 more years of schooling than the oldest generation of religious “nones” analyzed) that they have surpassed Christians in average number of years of schooling worldwide (10.3 years among the youngest unaffiliated adults vs. 9.9 years among the youngest Christians).

Gender gaps also are narrowing somewhat. In the oldest generation, across all the major religious groups, men received more years of schooling, on average, than women. But the youngest generations of Christian, Buddhist and unaffiliated women have achieved parity with their male counterparts in average years of schooling. And among the youngest Jewish adults, Jewish women have spent nearly one more year in school, on average, than Jewish men.

Despite recent gains by young adults, formal schooling is neither universal nor equal around the world. The global norm is barely more than a primary education – an average of about eight years of formal schooling for men and seven years for women. At the high end of the spectrum, 14% of adults ages 25 and older (including 15% of men and 13% of women) have a university degree or some other kind of higher education, such as advanced vocational training after high school. But an even larger percentage – about one-in-five adults (19%) worldwide, or more than 680 million people – have no formal schooling at all.

Religious minorities often have more education, on average, than a country’s majority religious group, particularly when the minority group is largely foreign born and comes from a distant country. For instance, in the U.S., where Christians make up the majority of the adult population, Hindus and Muslims are much more likely than Christians to have post-secondary degrees.

These are among the key findings of Pew Research Center’s new demographic study. The study is the first comprehensive examination of differences in educational levels by religion.