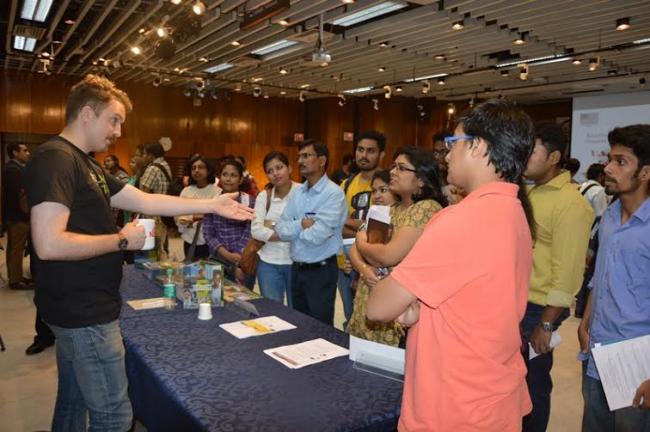 India Blooms News Service | | 10 May 2016, 11:06 pm
#India, # US, # EducationUSA, # U.S. University Alumni Fair, # Kolkata, # American Centre
Kolkata, May 10 (IBNS): EducationUSA, a part of the worldwide program administered by the United States-India Educational Foundation (USIEF), hosted a U.S. University Alumni Fair with American Diplomats for undergraduate and graduate students at the American Center in Kolkata on Tuesday.
The session offered the students an opportunity to interact with five American diplomats from the U.S. Consulate General-Kolkata.
The session opened with Assistant Public Affairs Officer (APAO) Greg Pardo delivering opening remarks and was followed by the diplomats sharing their first-hand experiences of having attended colleges in the U.S. and also specifics on their corresponding core areas of study.

Management Officer Cory Wilcox said, “I was looking forward to the fair.  Looking through the bright eyes of prospective students while talking about my own college years sounded amazingly nostalgic.”

“As a proud graduate of two U.S. universities, I was happy to encourage local students to apply to them,” stated Consul for Political and Economic Affairs Gaurav Bansal.

APAO Greg Pardo commented, “I’m really happy that I can share my university experiences with prospective students in Kolkata. It provides prospective students with an opportunity to learn about the vibrancy and exciting opportunities that campuses in the U.S. have to offer. The coolest part is that students go beyond just reading a prospectus packet, they are able to speak with an alumnus from these universities.”

Students were provided with insights on life in the United States — both on and off campus.
Based on their respective school and college experiences, the officers addressed various areas of U.S. higher education such as the quality of life on campus, sports, climate, cost-of-living, career opportunities and other general issues.
The attendees also had the opportunity to network with fellow students who may be traveling to the United States in the near future.

USIEF Regional Officer in Kolkata Shevanti Narayan noted, “EducationUSA Kolkata is delighted to bring this unique and exciting opportunity for potential Indian applicants to interact with American diplomats at the Consulate who are representing their U.S. alma mater in this fair. Students will learn about living and studying in the United States.”
Related Images