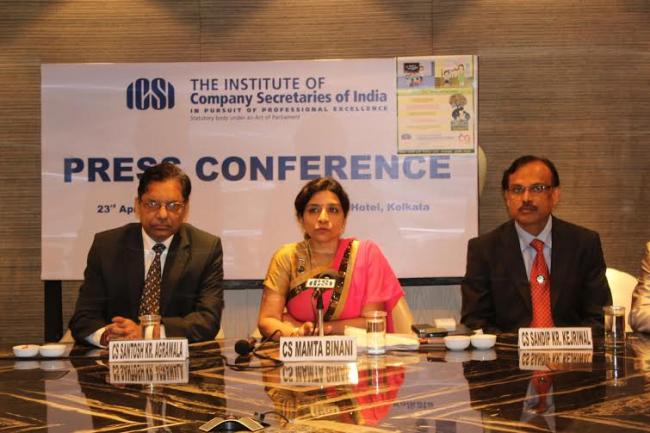 ICSI organises a national seminar on NCLT and NCLAT

India blooms News Service | | 25 Apr 2016, 04:17 pm
#ICSI organises a national seminar, # NCLT, # NCLAT, # Institute of Company Secretaries
Kolkata, Apr 25 (IBNS): The eastern regional council of the Institute of Company Secretaries (ICSI) on Saturday organized a national seminar on NCLT (National Company Law Tribunal) and NCLAT (National Company Law Appellate) for building capacity to face the forthcoming professional challenges and in taking up cases with them.
Mamta Binani, President, ICSI, informed that company secretaries are authorised to appear before NCLT and NCLAT and requires legal expertise, drafting skills, court etiquettes.
The objective of the national seminars by the institute is to covers moot courts, drafting aspects which will help the professionals to deal with cases more confidently.

“The ICSI is closely working with government authorities for betterment of MSME and other allied sectors and helping in the growth of the economy”, added Binani.

“Currently four different forums, High Courts, CLB, BIFR and the DRTs, have overlapping jurisdiction, which gives rise to the systemic delays and complexities in the process. The NCLT overcomes these challenges and would reduce burden on the Courts as all litigation will be filed before NCLT,” said CS Sandip Kumar Kejriwal, Chairman , EIRC , ICSI.

Such seminars were previously organised in  Guwahati and Chandigarh.