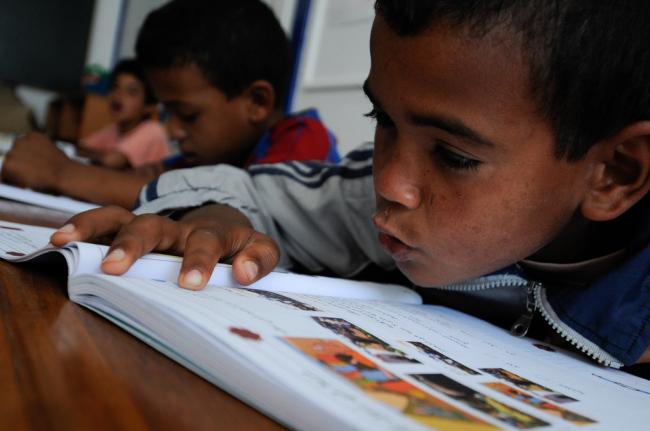 According to the study released on Monday by the UN Educational, Scientific and Cultural Organization (UNESCO) and the Education for All Global Monitoring Report (EFR GMR), 124 million children and adolescents are now out of school while international aid to education continues to remain below 2010 levels.

In addition, the latest numbers show that some 24 million children will never enter a classroom with girls remaining the most disadvantaged cohort figuring in the study. In South and West Asia alone, 80 per cent of out-of-school girls are unlikely to start school compared to just 16 per cent for their male counterparts.

In a press release accompanying the report's publication, UNESCO's Director General, Irina Bokova, pointed to warnings that unless countries “make serious commitments” towards increasing education aid, the ambitious targets made by the international community promising 12 years of free and equitable access to quality education “could remain elusive for millions of children and youth.”

The problem of education funding is of particular concern, the study adds. Despite a six per cent increase in aid to education, investment levels are four per cent lower on Monday than in 2010 and risk stagnating for the next few years.

“Aid needs to be shooting upwards, not creeping up by a few percentage points,” declared Aaron Benavot, Director of the EFA G “The world just set itself the huge goal of providing 12 years of free education. This simply won't happen unless donors get serious about funding.”

Estimates suggest that it will cost an extra $39 billion to provide the 12 years of education to everyone in low and lower-middle income countries. In order to fill this shortfall, however, UNESCO and EFA GMR note that donor countries must increase their aid to education six-fold.

“The Oslo Summit on Education for Development and the Third Financing for Development Conference in Addis Ababa next month present a real test of donor commitment,”  Benavot continued. “Without it, targets and promises for progress are unlikely to be met.”