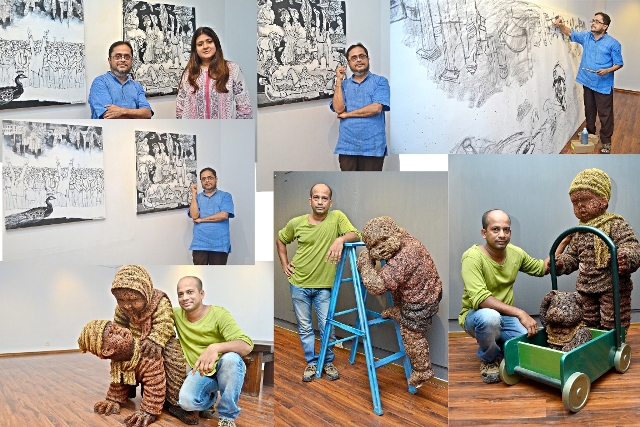 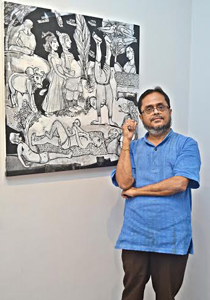 His paintings focus strongly on the ordinary man and the contradictions he faces in the society.

Speaking on his exhibition, Mullick said: “Black Comedy is a part of life which reflects the pain that every man hides within himself.”

“I have tried to find the reason why society laughs at them while he confines something within himself,” he said.

“In one of the paintings, I have used a peacock to show today’s children and why they do not think about their parents. Sometimes, they feel about their parents but they are bound by the compulsions of their jobs to leave them,” he said while describing one of his paintings.

Mullick said he has not seen paintings based on the theme of black comedy so far.

Speaking on the Gallery, Mullick said: “Ambica [Beri, director of Gallery Sanskriti] is a friend of mine and this gallery is not totally a professional venue. The friendly environment makes it a special venue.” 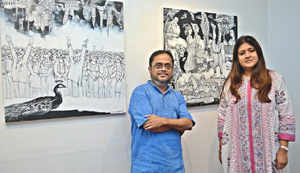 Through his sculptural works, Nantu Behari Das is expressing the dichotomy between humans and nature.

Das has juxtaposed the thought of tenderness with a medium as hard as metal, only to create the perfect illusion. 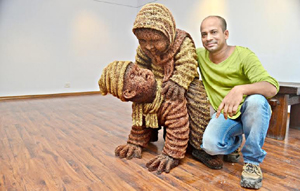 Speaking on the  exhibition, Gallery Sanskriti's director  Ambica Beri said: “ This is a very important year for our gallery.  Regarding this exhibition, I will like to say that we are not thinking much about the commercial aspects and sales and we are giving these artists a platform to express themselves."