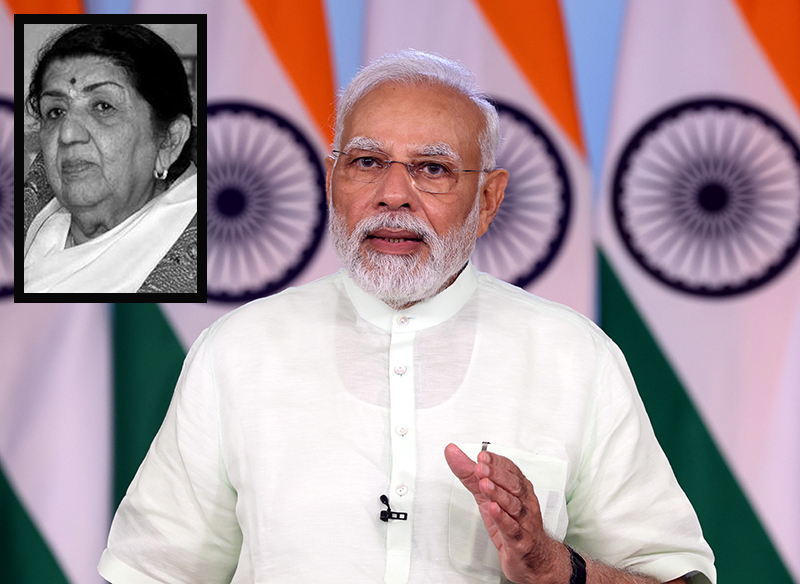 Lata Mangeshkar
PM addresses on the occasion of dedication of Lata Mangeshkar Chowk, in Ayodhya via video message on September 28, 2022. PIB

New Delhi, UNI/IBNS: Drawing an analogy to the way Ayodhya has held on to Lord Ram after so many eons, Prime Minister Narendra Modi on Wednesday said the hymns of the legendary Lata Mangeshkar have kept the conscience of the countrymen immersed in Lord Ram.

He was addressing a gathering after dedicating the Lata Mangeshkar Chowk in Ayodhya on her birthday via a video message.

The Prime Minister said that the Chowk inaugurated in the name of the singer in Ayodhya will enable people to feel a sense of duty towards the nation.

"Just as Lata Didi was always very conscious about the civic duties, similarly this chowk will also inspire the people living in Ayodhya and the people who come to Ayodhya for their devotion to duty," he said.

"I believe that the Lata Mangeshkar Chowk of Ayodhya and all such memories associated with her will enable us to feel a sense of duty towards the nation," he added.

The Prime Minister said that Lata was such a seeker of Maa Saraswati who stunned the whole world with her divine voice.

Modi underlined that the huge Veena of Maa Saraswati installed at the Chowk will become a symbol of musical practice.

The Prime Minister said that the 92 white lotuses made of marble in the flowing waters of the lake in the chowk complex represent the life span of Lata Mangeshkar.

The Prime Minister expressed happiness that the place of development of Lata Mangeshkar Chowk is one of the major connecting sites of various places of cultural importance in Ayodhya.

The chowk is located near Ram ki Paidi and is close to the holy stream of Saryu.

Lord Ram is the symbol of Indian civilization and a living ideal of our morality, values, dignity, and duty, Modi said.