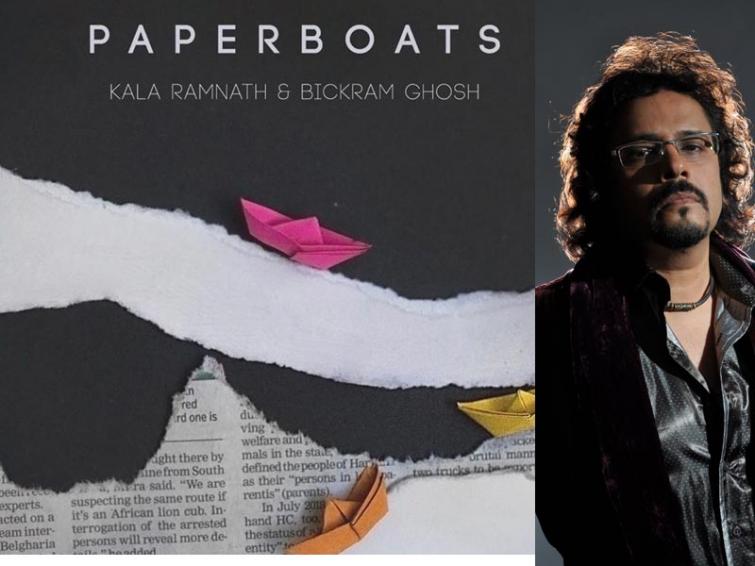 Cross-pollination of cultures is a major force: percussionist Bickram Ghosh

Engaged in Bollywood projects and carrying forward his fusion experiments, percussion maestro Bickram Ghosh is busy creating what he does best: music. He shares glimpses of his musical journey and present works in a conversation with Subhojit Roy

Tell us about the Bollywood projects you are working in…

I am scoring music for Torbaaz starring the iconic Sanjay Dutt and Nargis Fakhri directed by Girish Malik.  My collaboration with Sonu Nigam for the film “Jal” won an Oscar nomination in 2015 for the best original score which was also directed by Girish Malik. My other Bollywood film under production is "Band of Maharajas" once again a Girish Malik directed film and I am acting too as Feroze Jamshed, an Afghan percussionist.

Collaboration and cross-pollination of cultures is a major force. Fusion music allows people the space to expand and thrive. My fusion studio is a collaboration workshop creating a track followed by recording and live performance. Our Amsterdam exercise was a huge success with a grand finale concert at the prestigious concert Gebow which was a sould-out! With this kind of earnest endeavour Indian music also expands its horizons.

Paper Boats is your latest collaboration with Kala Ramnath, the virtuoso violin player, tell us about the album…

Paper Boats remind us of childhood, when we inhabited an idyllic world with no sense of barriers, a playful world where imagination merged seamlessly with reality. The album is a collaboration with a fabulous violinist  Kala Ramnath showcasing on the one hand , the purity of unadulterated childhood. Paper boats symbolise this playful world propelled by the imagination. On the other hand the album also addresses the terrible segregation between individuals that adulthood brings to the fore . Across the world today we are engulfed by the terrors of a world where human beings inflict inhuman atrocities on each other . We have moved away from our core position of compassion and this has created a seemingly irreparable rift among people. Paper Boats is an appeal to bring back our core innocence which stems from the sense of oneness of spirit . If we can touch that core, there will be hope. The project brings together artists from across the globe ( USA, UK, Italy, France, Morocco, Afghanistan, Egypt, Madagascar, Armenia, Bangladesh and India ) unified through a seamless melodic vision of the two lead artists . The barriers of musical forms are broken down to create a musical vision that allows Indian classical, jazz, western classical, Afro- Cuban and other forms to blend with uniformity. The artists hope that their musical unity can be replicated in life to create a harmonious world where all individuals co-exist in peace and creativity.

Does new-age experimental music have a future?

My personal graph with this firm has been great over the last two decades,  albums like Rhythmscape, electro-Classical, white note, transformation, beyond Rhythmscape are still the best sellers. I continue to create more recordings and the latest being the collaboration with Kala Ramnath  in Paperboats. Rhythmscape, my band,  continues to tour globally and I see a great better future for this crossover music as that’s where the work is headed.

You have a fabulous partnership with the great Sonu Nigam, tell us about the association.

We have created a body of work together including the Oscar contending score for Jal and the GIMA winning album "The Music Room" being the topmost among them. Presently we are working on two other albums and as friends we are very close sharing a deep bond and surely he is one of the most warm hearted human beings I know.

Has there been any pressure of being a son of such illustrious parents having to perform in the same field or was there a choice of any other career?  Who has been your inspiration?

It has not been easy and early years were a big struggle trying to create a niche of my own out of my father’s (Pandit Shankar Ghosh the illustrious Tabla maestro) shadow. But then with God’s grace I was recognised on my own steam eventually. Yes I was given a choice but I wanted to be a musician. My father and Guru Pandit Shankar Ghosh, he honed my tabla skills and gave me incredibly insightful knowledge into the intricacies of rhythm. I also learnt Carnatic rhythms from Pdt. S.Sekhar, the great Mridangam player.

Your favourite pick of musical cities in the world?

Kolkata, Chennai & Pune for Classical Music, these cities are where even regular households encourage music at home. While internationally New York, London and Paris are my favourites for experimental forms. The minds of the listeners in these cities are expanded to embrace new forms . These cities are cultural melting pots. Indian classical music through the efforts of maestros like Bharat Ratna Ravi Shankar ji, Ustad Ali Akbar ji,  Ustad Zakir Hussain ji has a huge acceptability abroad .

How does Bickram Ghosh spend his time?

I do a lot of Meditation, regular morning walks, hitting the studio after breakfast. Unless there is a concert in the evening,  I am a home bird. I also read a fair bit. Hanging at home or with friends , reading books, watching movies.