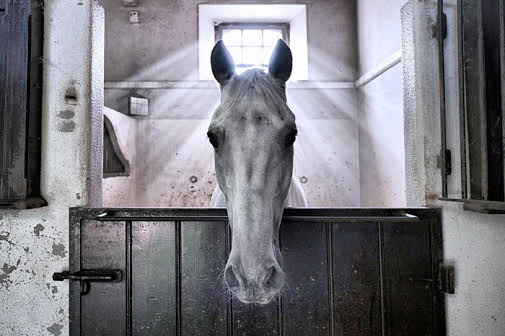 The FEI Solidarity World Photo Grand Prix competition, aimed at uncovering photographic talent around the world in 2014, the Chinese Year of the Horse, was launched in May by the Fédération Equestre Internationale with Action Images/Thomson Reuters, asking amateur and professional photographers to submit images that capture an aspect of equestrian sport and lifestyles in a memorable and eye-catching way.

Lisbon-born Scarpa, who fell in love with photography 10 years ago, has won over 90 national and international competitons, with her images being showcased this year at the Sony World Photography Awards exhibition and on NASA’s Earth Observatory website.

“I love horses more than wine, and instead of photographing the spectacular vineyards, I headed to the stables where I saw this beautiful horse,” she explained. “The light was fantastic, the horse was perfectly positioned in the middle of the window, and I took the shot in a split second. If he had moved an inch, this image would not have been possible. It was an amazing and lucky moment.”

Unbeknown to Scarpa at the time, Xisto is a successful Driving horse and has been nominated to compete with Portugal’s Manuel Campilho Holstein at the Alltech FEI World Equestrian Games™ 2014 in Normandy, which start in just nine days. Scarpa’s prize is an all-expenses-paid assignment with Thomson Reuters at the Games.

“This is an amazing twist of fate, and I really hope I meet Xisto again, this time in Normandy! I have four sons, and my fifth is my camera. Photography is my life, and winning this competition is my biggest achievement so far”, she said.

“The entries across each category were of an extremely high calibre, which meant the judges had a tough time coming up with the short-list and overall winner”, Alan Whiter, Vice President of Action Images said. “The winning image captures the imagination of the viewer as it almost looks like a painting. The layers of depth, light and symmetry make for a really striking image.”

Scarpa also won the Horse Portrait category of the FEI Solidarity World Photo Grand Prix, one of nine categories for which over 3,500 images were entered.

“I was struck by the diversity, beauty and genuine inventiveness of all the images entered in the competition,” FEI President HRH Princess Haya said.

“The category winners, and all the shortlisted images for that matter, really left an impression on me and I am grateful to have seen the sport and horse world through so many different lenses. Needless to say it was refreshing and eye-opening!”

Photo caption: Portuguese photographer Filipa Scarpa has won the top prize in the FEI Solidarity World Photo Grand Prix for her image of Xisto,
the angelic Lusitano, who has been nominated to compete at the Alltech FEI World Equestrian Games™ 2014 in Nomandy, France. (Filipa Scarpa/FEI)