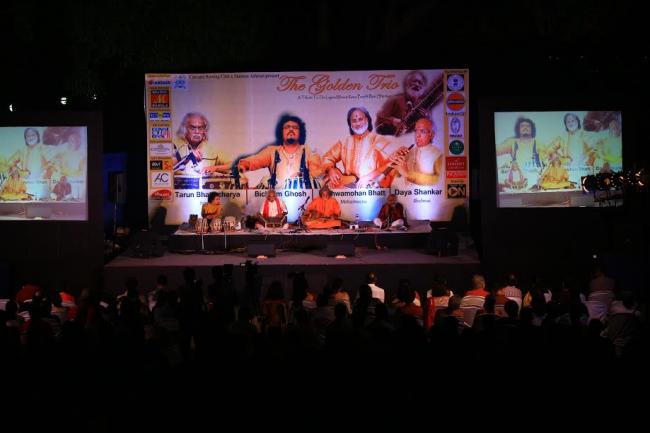 Well, the answer was in the entrallment and applause betrayed by a full audience at the Calcutta Rowing Club on Friday last as the acclaimed musicians, better known as The Golden Trio performed for more than 950 people on the lawns of the 150 year old establishment.

Pandit Vishwa Mohan Bhatt, who was recently awarded the Padma Bhushan, started the ensemble with a speech, remembering his mentor, the Late Pandit Ravi Shankar who created the concept of 'The Golden Trio' back in the mid 1980's.

He recollected the instant success of 'The Golden Trio' concept as he took a trip down memory lane, at the different prestigious venues like The Royal Albert Hall, London, Jubilee Auditorium, Canada and Theater De la Vel, Paris to name a few.

The Mohan Veena (modified Hawaiian side guitar) artist also expressed his elation at having the opportunity to perform beside a lake, as he felt that music and water are somewhat interconnected. 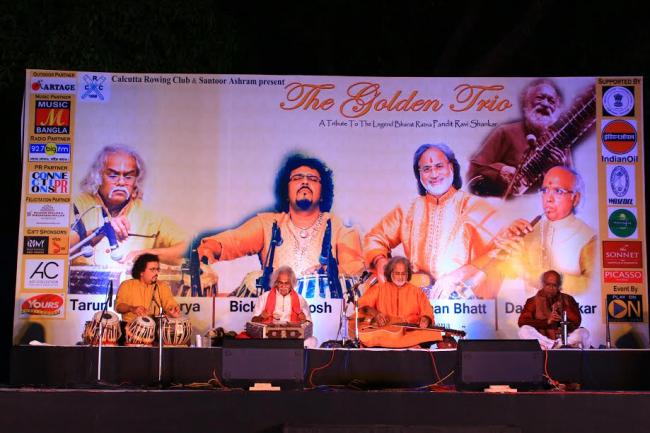 As the evening progressed with the tunes of the Mohan Veena, Pandit Daya Shankar's shehnai, Pandit Tarun Bhattacharya's santoor, accompanied by the beats of Bickram Ghosh's tabla, it didn't take much of an effort to feel the charged atmosphere by the loud applause following each rendition.

The Santoor Ashram, a brainchild of Pandit Tarun Bhattacharya, was also brought to focus during the event.

A modern-day Gurukul situated in a village near Kolkata, its objective is to instill love for Indian Classical music amongst the young minds, train the gifted but financially impoverished music students for free; thus keeping the ancient, pure form of the Guru-Shishya Parampara alive.

The evening of musical extravaganza was managed by PLAY ON, while the musicians were felicitated by Chandrashekhar Ghosh, Founder, MD, CEO of Bandhan Bank, Chandra Surana, Goutam De, Regional Director, ICCR and Sudip Mullick from Balaram Mullick and Radharaman Mullick.