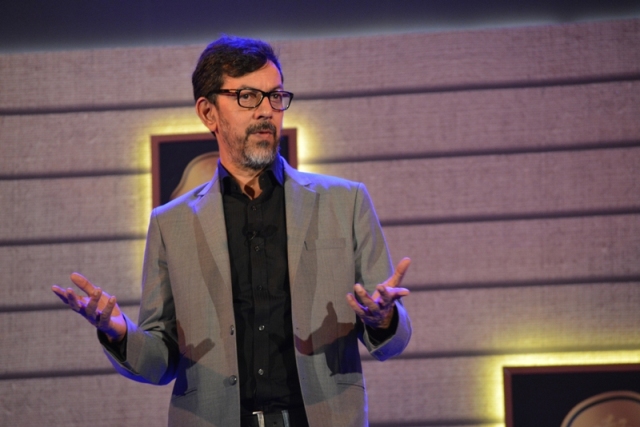 India Blooms News Service | | 17 Jun 2016, 08:45 am
#Rajat Kapoor, #Indian plays, #Shakespeare adaptation, #I Don't Like It, #As You Like It
Actor-playwright Rajat Kapoor is back in town with his clowns! He had enthralled audiences last December with his adaptation of Shakespeare's Macbeth, by turning it into a clown play. Crowds will be hoping for an encore from this cerebral actor when he lets his team loose on the 18th of June (Saturday). IBNS correspondent Sudipto Maity caught up with him before the start of 'I Don't Like It-As You Like It'

Your play premiered on March 5th in Mumbai. Why did it take you three and half months to travel to Kolkata?
Somebody has to call us, you know. Wherever we go, we travel only when somebody invites us. Is it easier to state a point with clowns in place?

I don’t know if it’s easy or not, but it is more interesting for sure. This gives me a point of interest. Are there scary clowns this time? No, there are not. The scary clown thing was only for Macbeth. This is something else.
What’s the first play you ever watched? How old were you? I started quite late in my journey for theatre. The first play I watched was a Woody Allen play and I was 18 or 19 years old, nothing before that.
Do you have plans of doing anything else apart from these Shakespearean plays?

I don’t have any such plans. I don’t know what my next play is going to be. I take one play at a time, so there is no grand plan as such.
Tell us about your relationship with Centre Stage Creations. Do you think they are good hosts? We have been performing at GD Birla Sabhaghar, I think forever. I have been going there for the last 15 years now. This is our sixth play there. Centre Stage invited us last time, they have invited us again. I think they are doing something valuable for people in Calcutta. They are wonderful hosts.  {image_3}

The last time we spoke, you said that most of the cinema in India is bad. Do you think it’s the same with plays?
I think it’s a little better for plays; it’s not as bad as the cinema, though the overall scenario is quite bad. I think there is not enough innovation which is done here. While scripting a play, can you predict if it’s going to work or not? No you can’t. That is the exciting part because we don’t know what will work and what won’t.
While writing the script, do you allow people or close friends to read part of it or do you ask for their suggestions? No, because we work very closely with the people who are part of the play and I think it’s important to know their feedback rather than everybody else’s.
In terms of audience, which place in India is the most play savvy? I think Bombay, Bangalore and Delhi, in that order. And across the world? I cannot tell you that. I haven’t travelled that much. In India I have travelled extensively. I have travelled to other places but don’t have the data to say which place is the most play savvy.  Vinay (Pathak) features in most of your plays. Do you share a special bond with him?
I share a special bond with everybody that I work with. Yeah Vinay may be a little special than others. It’s about his enthusiasm. If he is available, why won’t I work with him.