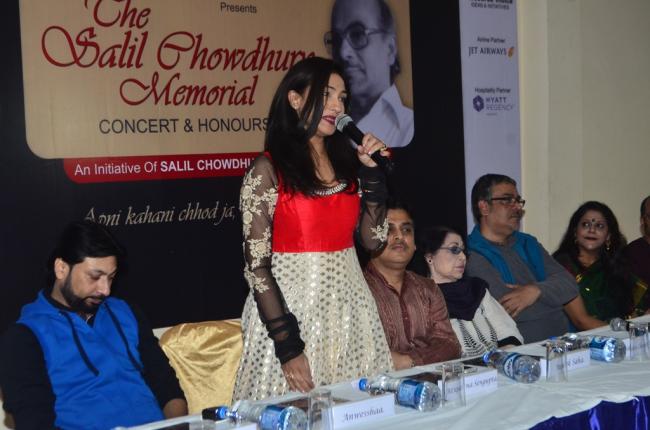 The occasion marked the unveiling of a special calendar and website on the maestro by actress Rituparna Sengupta, singer Sabita Chowdhury (wife of Salil Chowdhury) and their daughter Antara Chowdhury.

“Future presentations on the project The Salil Chowdhury Memorial- Concert and Honours would include concerts in Mumbai, New Delhi and elsewhere in the country and abroad- with annual honours for ‘Living Legends’ and ‘Signature Contribution’ in the world of music," said Antara Chowdhury.

"Apart from live events, there would be many other commemorative projects and these would, eventually, lead to a permanent centre that would house a complete archive of the composer’s work and memorabilia from his life and times…. And one that would be seen as a ‘pilgrimage’ by music researchers, scholars, students and enthusiasts”, said Antara Chowdhury.

Salil Chowdhury Foundation of Music, instituted by the late composer’s family and chaired by his daughter Antara Chowdhury, has been celebrating the birth anniversary of the legendary maestro for the last 13 years.

On  Nov 19 last year, knocking the 90th Birth anniversary of the  composer the foundation teamed up with three consorts namely, Shyam Sundar Co. Jewellers , Centre Stage Events and Resources Indica Communication to take the remembrance beyond an annual event. The inaugural presentation was held at Kala Mandir.

The event concluded by displaying a calendar with monochromes of the legend.

Adding up to it was the presentation which included screening of an audio-visual on “The Salil Chowdhury Memorial- Concert.