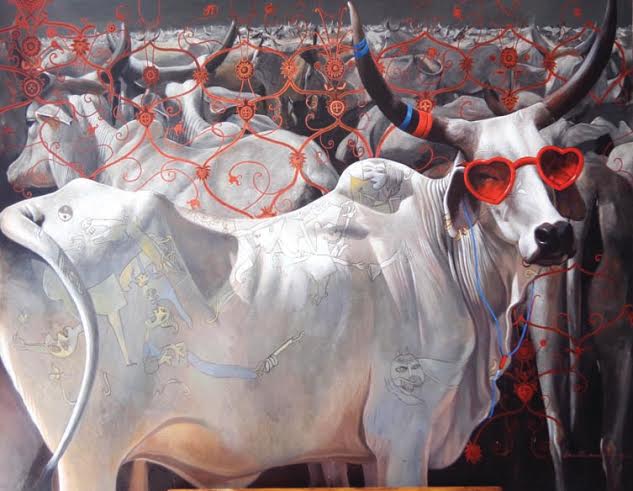 Prayas was inaugurated on June 29 at the Satyajit Ray Auditorium, ICCR, Kolkata by Jogen Chowdhury, eminent artist and MP, Rajya Sabha. The Guests of Honour at the inauguration were  Ranjan Bandyopadhyay, eminent novelist and journalist, Rabin Mondal, eminent painter, Ramananda Bandyopadhyay, eminent painter  Niranjan Pradhan, eminent sculptor, Mrinal Ghosh, eminent art critic, and Esha Dutta, art connoisseur and Director, Priya Entertainments. On this occasion, the Prrayas Lifetime Achievement Awards 2015 were conferred on painter Ramananda Bandyopadhyay, sculptor Bipin Goswami, eminent archaeologist  Goutam Sengupta and well-known environmentalist Subhas Dutta. Prayas is being held at the Chemould Art Gallery, Kolkata from June 30 to August 31 between 12 noon and 7 pm daily.  This 60-day period has been split into twelve 5-day phases in each of which there will be an exhibition of paintings or sculptures of eight to ten artists, with one of them being a senior, well-known artist and playing a pivotal role in the interactions and sharing of views and ideas.  The senior well-known artists who will play this role are Apurba Pal, Chhatrapati Dutta, Biraj Kumar Paul, Dhiren Shasmal, Dilip Chaudhuri, Bimal Kundu, Subrata Das, Niranjan Pradhan, Biswapati Maity, Partha Roy, Sekhar Kar and Thota Vaikuntam. The names of the participants are enclosed. These twelve 5-day exhibitions will be open to the public. These twelve 5-day exhibitions apart, there will be art workshops with the active participation of the senior artists, guest artists and the young and upcoming artists, as well as an ‘addar ashor’ (storytelling session) with the participation of eminent art critics. Smita Art and Chemould Art Gallery have organised Prayas this year, encouraged by the response they received to Prayas 2013 and Prayas 2014 in which 100 and 120 artists, respectively, had taken part.  They intend to donate, through their social service partners, Rotary Club of Calcutta Mega City, a part of the sales proceeds from Prayas this year for the relief of Nepal’s earthquake-affected people.