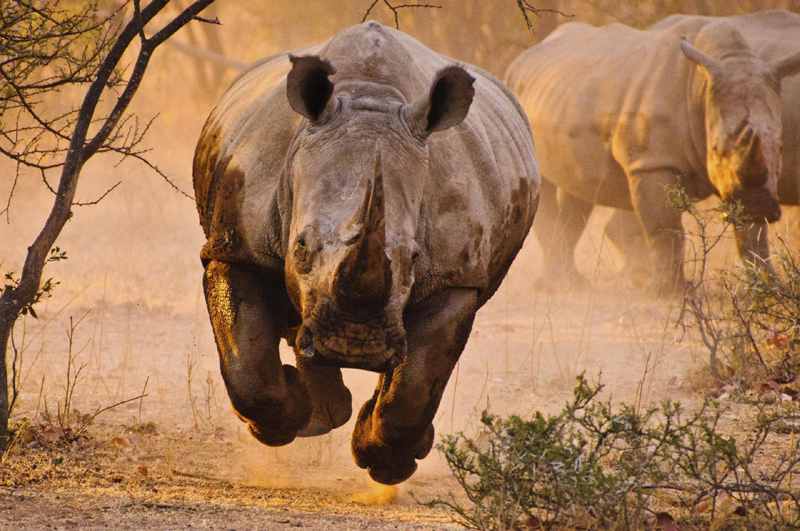 How India's expanding airports are conduits for wildlife trafficking

India is among the top 20 countries for the illegal wildlife trade and its fast expanding airport sector is often used by wildlife traffickers to smuggle high-end, high-value species and products. Wildlife trade poses the second-biggest direct threat to the survival of species after habitat destruction, reports Mongabay India writer Mahima A. Jain

The global illegal trade in wildlife is worth upto US$ 19 billion annually, and is the fourth largest illicit market after drugs, counterfeit, and human trafficking.

On June 21, 2020, Kolkata airport officials arrested a man with exotic macaws and parrots, native to South America and New Guinea. The birds were smuggled from Bangladesh, and headed for Bengaluru, local media reported.

This isn’t an isolated incident. Wildlife traffickers routinely use the gaps in the rapidly expanding air transport sector to smuggle endangered and exotic live animals, plants, and their parts. Wildlife trade poses the second-biggest direct threat to the survival of species after habitat destruction.

“Wildlife trafficking by the air is generally of high-end, high-value products,” explained Badola. In comparison, smuggling by seaports or land is large in volume or size.

India is among the top 20 countries for the illegal wildlife trade, according to data analysed by TRAFFIC. Chennai and Mumbai airports act as key destinations and origin points for traffickers, according to a report published by USAID ROUTES (Reducing Opportunities for Unlawful Transport of Endangered Species) Partnership and TRAFFIC in May 2020.

There is a spike in trafficking instances at other fast-growing international airports in India, such as Bengaluru’s Kempegowda International Airport, which appointed a special wildlife cell in 2017 to handle the growing issue. 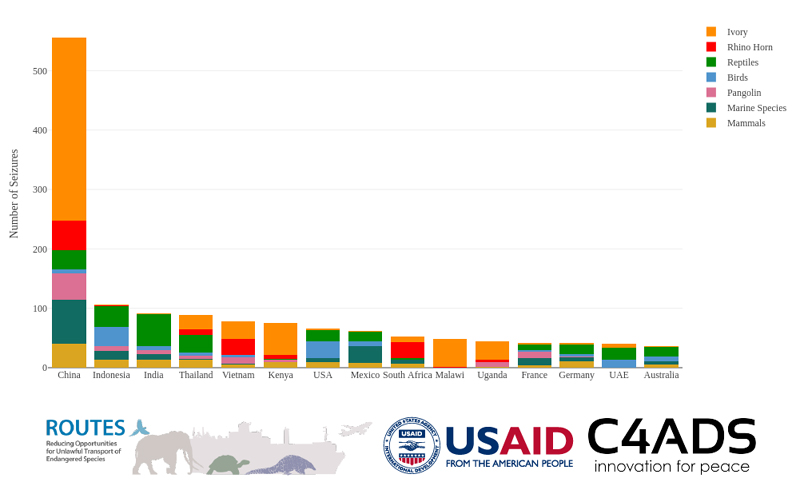 The number of seizures of wildlife in airports between 2009 and April 30, 2020. India is among the top 20 countries for the illegal wildlife trade. Chart by ROUTES.

Airports are the perfect trade flow bottlenecks as both the smugglers and the goods are in the same location, the International Air Transport Association’s (IATA) training module for airport staff, notes.

Smugglers operating across the country, however, can’t avoid the stringent luggage checks at airports, which offer the opportunity for detection, interception and tracking of wildlife trade networks.

“Customs officers use their judgement based on the location, they assess the risks and conduct random checks. The profile certain passengers based on flight routes, behaviour or demographic to track down such cases,” Maranko explains.

India scores 82% in the country enforcement index, with officials having made 71 of the 97 possible seizures at airports, according to a dashboard presented by ROUTES. The data for the dashboard is from C4ADS’ Wildlife Seizure Database that has information on 4,000 global seizures in the last five years, making it possible to trace trends and understand the mechanics. 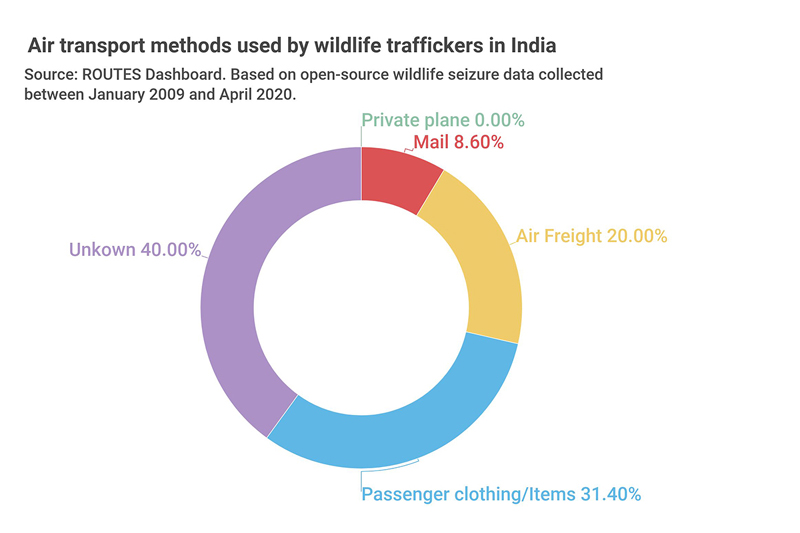 India is at the epicenter of the south Asian reptile trade. Protected and critically endangered species like the Indian star tortoises and black pond turtles are smuggled out to Thailand and Malaysia, where they are sought after as pets. On the other hand, red-eared slider turtles are brought in from southeast Asia.

While trafficking through air, live animals are packed into handbags or suitcases depending on their size, with additional methods used to hide their presence. For instance, star tortoises are just under 12-15 cm long at the hatchling stage and grow to no more than 20-25 cm, making it easy to hide inside suitcases.

“Tortoises urinate when they are scared or jerked. To avoid dealing with the mess of 200-300 tortoises urinating during a 3-6 hour flight, the smugglers often wrap the inner part of the suitcase with diapers,” Maranko explains. Other creatures like rodents and monkeys are hidden in baskets between chocolate boxes, or sea horses in ziplock bags.

UNEP’s Bagai points out that often the focus of the customs department is on seizing precious metal, weapons, ammunition, and drugs. Airport officials say these are easier to screen and come under the principal mandate of the revenue department.

Badola also notes that there is a lack of capacity among enforcement agencies, airport and airlines staff to deal with wildlife cases. “There need to be orientation programmes to build capacities to combat this trade,” he adds.

“We routinely conduct training and capacity building sessions for officers to cover wildlife products, species and derivatives,” explains Manoj Kumar, Joint Director at the National Academy of Customs, Excise and Narcotics where customs officials are trained. He added that customs officers are regularly updated on the several multilateral environmental agreements under the global Green Customs Initiative, which includes CITES. 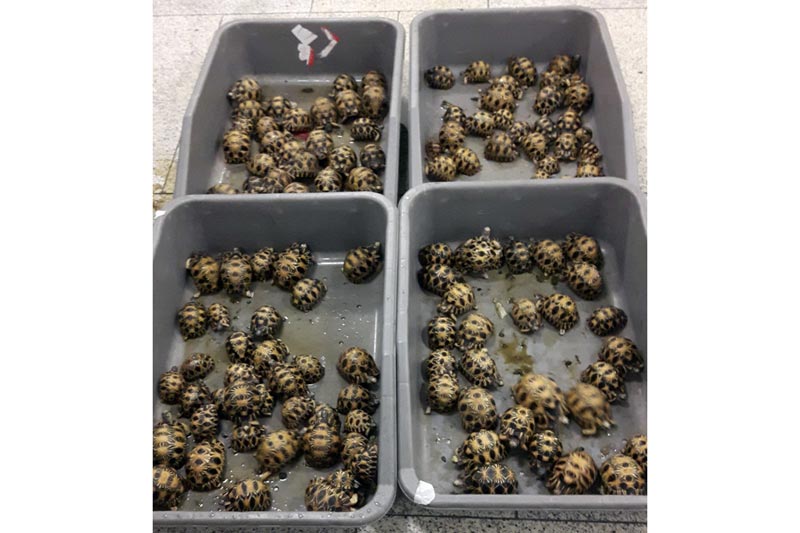 Turtles confiscated a Mumbai airport in 2016. India is at the epicenter of the south Asian reptile trade. Photo by Kiran Kumar Karlapu.

The illegal wildlife supply-chain goes beyond the seizures at the airport. Maranko explained that curbing it requires identifying the forward and backward linkages with the cooperation of state forest and police departments, CBI, revenue intelligence, various border security departments, railway and industrial police forces, enforcement directorate, and customs.

The supply-chain originates in forests and natural habitats, and involves several people, from locals and poachers to carriers responsible for transporting the consignments across and out of the country.

To have an idea of the scale of reptile trade — since 2009, 1,11,312 individual tortoises or freshwater turtles (11,000 a year) were illegally traded across India, according to TRAFFIC.

Over 60% of seizures, of tortoises or turtles, emerge from Uttar Pradesh and West Bengal. Officials say a crackdown at the origin and logistics network has resulted in a decrease in star tortoise smuggling.

UNEP’s Bagai noted that, past the customs point, the opportunities to detect smuggled animals and plants are limited to aircraft staff and officials at the destination.

Intelligence generation and sharing with other international organisations is crucial at this stage, notes Kumar of the National Academy of Customs, Excise and Narcotics. In 2017, 97 star tortoises seized at the Singapore airport were repatriated to India. India too routinely deports any seized creatures who survive the journey, back to the airport it originated from.

IATA has the United for Wildlife Taskforce, a customs database, and global partnerships with several airline operators and agencies. 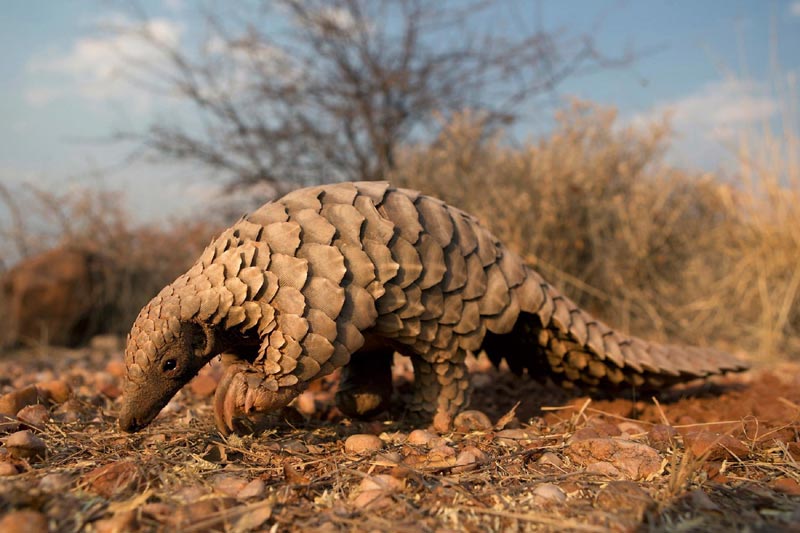 Despite the strides made in international regulation and enforcement of legal and illegal wildlife trade, gaps still remain.

Richard Thomas, Head of Communications, TRAFFIC pointed out: “There’s a lot of species CITES doesn’t cover and even for those it does, the permitting system is open to fraud in a variety of ways: from reusing permits to false permits.”

“Passengers who aren’t aware of the rules and regulations around wildlife may unknowingly purchase or bring prohibited items to India,” said Badola. Awareness campaigns aimed at the public and airport authorities are required to widen the understanding of threatened species, illegal wildlife trade and international conventions.

TRAFFIC’s campaign called “Don’t Buy Trouble”, and the UNEP-WCCB collaboration for “Not All Animals Migrate By Choice” aimed to create awareness amongst flyers, tourists and airport authorities about the prevalence of illegal wildlife trafficking by air, prohibited items, and souvenirs they should avoid.

In the light of the COVID-19 pandemic and focus on zoonotic diseases, Thomas said interest in curbing illegal wildlife trade and strengthening international frameworks is increasing.