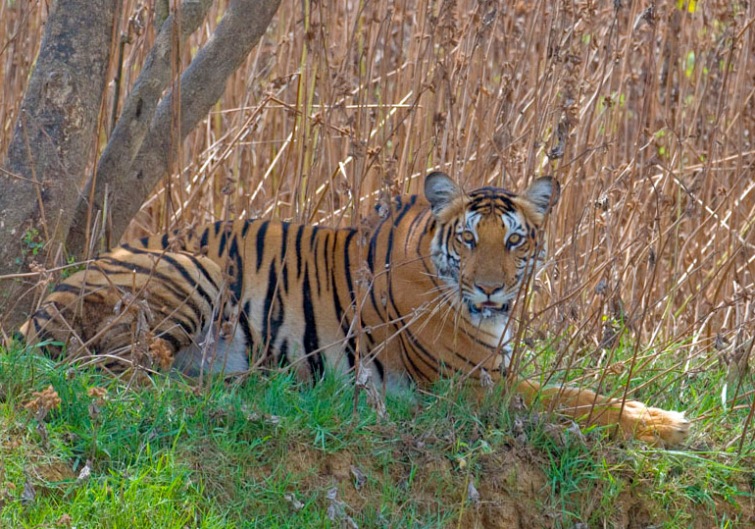 Mysuru/UNI:  A 65-year-old shepherd was killed and carried away by a Tiger on the fringes of Nagarahole National Park near Hunsur district in Karnataka.

Forest officials said on Tuesday that the Department and the local tribals, who had launched combing operations last evening and called off due to rain found the half-eaten body inside the jungle today.

The deceased has been identified as Jagadeesh, a resident of Neralakuppe B Haadi on the fringes of the forests, had been out to graze sheep. He left home yesterday morning and did not return to his village but the goats and sheep returned to their sheds.

The family went in his search but could not find him. On searching the areas around Handihalla, the normal place where he used to graze, the family members and villagers found his pair of slippers, umbrella, a sickle and a stick that was regularly carried by him. They also found blood stains near the umbrella.

Realising that the Tiger could have dragged Jagadeesh into the woods, the villagers alerted the Forest Department officials who launched a combing operation last evening.

The combing operations were led by Dasara elephant Balarama and five other elephants including Ganesha, Chandrika and Bheema along with RFO Hanumantharaju. The Department staff, however, had to abandon the combing as it rained heavily last evening along with hailstones. The operation resumed this morning.

The remains were spotted by local Tribals who have immense knowledge about tiger movements. In all, over 100 persons were part of the search operation.

The Tiger was on the prowl in the area since the last 4 to 5 days and the Department had warned the villagers not to venture inside the jungle or the nearby areas.

Workers, who were laying Railway track fencing along the forest two days back, had noticed the feline and had abandoned their work as fear had gripped the area.

The Special Tiger Task Force (STTF) had installed camera traps in various places to capture the movement of the big cats. The STTF installed the cameras after finding pug marks in the villages. The cameras can capture images at a distance up to 50 meters and can record 3,000 images at a time. The tiger that was on the prowl was captured in these cameras.