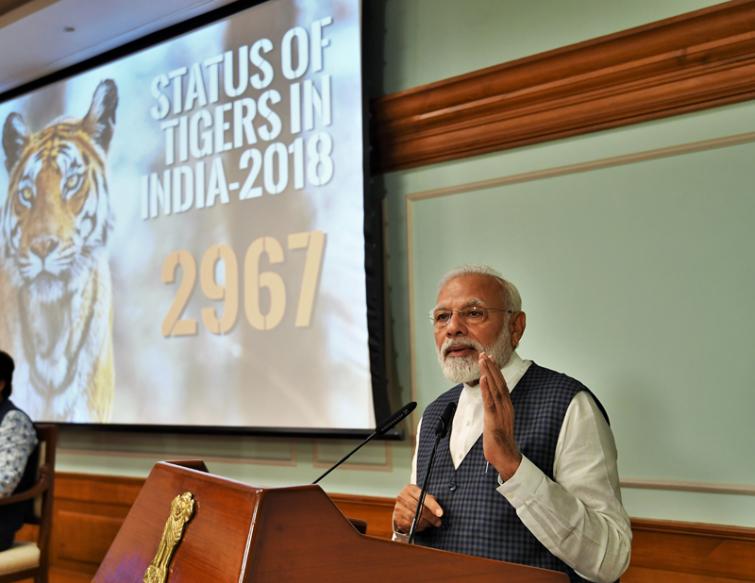 Count of Tigers in India rises to 2967; PM Narendra Modi describes this as a historic achievement

New Delhi, July 29 (IBNS): On the occasion of Global Tiger Day on Monday, Prime Minister Narendra Modi released the results of the fourth cycle of All India Tiger Estimation - 2018, at Lok Kalyan Marg in New Delhi where the data showed that the country now is home to 2967 tigers.

Speaking on the occasion, the Prime Minister described this as a historic achievement for India, and reaffirmed India’s commitment towards protecting the tiger.

The Prime Minister appreciated the speed and dedication with which various stakeholders worked to achieve this.

The story that started with @EkThaTiger and then continued with @TigerZindaHai , should not stop there. It should be "Baaghon mein bahaar hai" : PM @narendramodi on a lighter note on the occasion of #InternationalTigerDay @PrakashJavdekar @moefcc pic.twitter.com/p04M8lIbaq

He described it as one of the finest examples of Sankalp Se Siddhi.

Once the people of India decide to do something, there is no force that can prevent them from getting the desired results, he declared.

The Prime Minister said that with almost 3000 tigers, India is today among the biggest and most secure habitats.

Narendra Modi asserted that the way ahead is “collectiveness” instead of “selectiveness.”

He said that a broad-based and holistic look is essential for environmental conservation.

He said, it is possible to strike a healthy balance between development and environment.

“In our policies, in our economics, we have to change the conversation about conservation,” he added.

"India will build more homes for our citizens and at the same time create quality habitats for animals. India will have a vibrant marine economy and a healthier marine ecology.

"This balance is what will contribute to a strong and inclusive India," the Prime Minister asserted.

He said that in the last five years, while work has proceeded at a fast pace for next-generation infrastructure, the forest cover in the country has also grown.

He said that India is making a sustained effort to make its economy “clean-fuel based” and “renewable energy based.”

He said “waste” and “bio-mass” are being made a big part of India’s energy security.

He mentioned the progress made in schemes such as “Ujjwala” and “Ujala” for LPG connections and LED bulbs, respectively.

In conclusion, the Prime Minister called for even greater efforts, towards Tiger Conservation.