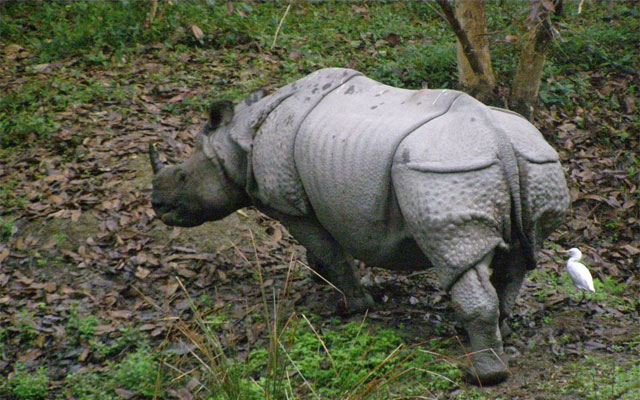 Guwahati, July 19 (IBNS): The wild animals in Assam’s Kaziranga National park have suffered majorly following the devastating flood submerged over 95 per cent areas of the park.

The forest guards and locals have found more bodies of the wild animals that died in the park during the deluge.

According to the Kaziranga National Park authority, 92 wild animals, including eight rhinos, have died in the park during the flood so far.

Among the wild animals, 7 rhinos, 41 hog deer, 6 wild boar, 4 sambar, one elephant, one swamp deer, one water buffalo, two porcupine were drowned in flood waters in the park.

On the other hand, 13 hog deer and 1 sambar were died in vehicle hit, while the wild animals have been forced to move to neighbouring hill areas in Karbi Anglong district following the flood.

According to the park authority, one rhino and 10 hog deer were died in other reasons in the national park during the current flood.

The forest department, CWRC and the locals have rescued 61 wild animals including two rhino calves, 50 hog deer, one baby elephant, two swamp deer, one sambar and five other animals from the park and adjoining areas.

The flood situation in the park has gradually improved but 78 forest camps in the national park are still under water.

Over 95 per cent areas of the world heritage site have been submerged by the flood waters in which the wild animals have been forced to move the neighbouring hill areas of Karbi Anglong district by crossing the Asian Highway – 1and adjoining areas of the park.

On the other hand, following the deluge, the Assam forest department has opened a help line number (0361-2332830) and urged the people to help the park authorities, forest department to rescue the wild animals.

Assam forest department PRO Sailen Pandey said that, the state forest department, park authorities, NGOs, CWRC are engaged in rescue operations to safely rescue the wild animals, who were moved outside of the park following the devastating flood.

On the other hand, some wild animals have also entered residential areas.

On Thursday, a tiger escaped from the national park and was spotted'relaxing on a bed inside a house near the park.

“The tiger was spotted nxt to the highway at 8:30 am, moving fm the park, just 200 m away, on its way to Karbi hills abt 500 m across the National highway. Probably disturbed, he jumped across the wall of a scrap garage & took refuge in the dark room,” WTI tweeted.

Later, the tiger moved to the park.

Similarly, locals have spotted an injured wild elephant in a tea garden area located near the national park.