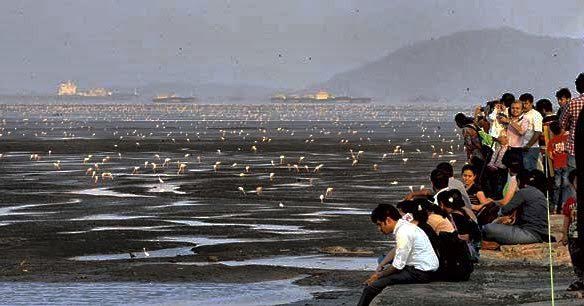 India Blooms News Service | | 02 Feb 2017, 01:08 pm
#WorldWetlandsDay, #BNHS, #SaveOurHeritage, #WetlandsforourFuture
Mumbai, Feb 2 (IBNS): World Wetlands Day is celebrated every year on Feb 2 to raise awareness of about this unique geographical area which is integral to the well-being of the globe

Wetlands are  areas where water covers the soil, or is present either at or near the surface of the soil all year or for varying periods of time during the year.

Wetlands offer a variety of ecosystem services like they harbor a variety of plants, support a number of animal and bird species, attract migratory birds, help avoid floods by soaking up excess rain water, and purify water.

World Wetlands Day marks the date in 1971 when the Convention on Wetlands, known as the Ramsar Convention, was adopted in the Iranian city of Ramsar, drawing attention to the importance of wetlands.

The theme for 2017 is “Wetlands for Disaster Risk Reduction”.

The theme aims to raise awareness and to highlight the vital role of healthy wetlands in reducing the impacts of extreme events such as floods, droughts and cyclones on communities, and in helping to build resilience.

India's leading nature and environment conservation body, Mumbai-based BNHS, has urged that Thane Creek (Thane district) and Hatnur Dam (Jalgaon district) of Maharashtra be recognised as Ramsar Sites as along with a few others.

Maharashtra could have a total of seven Ramsar sites including two newly designated IBAs which qualify along with the five sites proposed earlier, said BNHS recently.

There are 26 Ramsar sites in India, none of these are in Maharashtra.

In 2013, the Maharashtra Forest Department identified and proposed five prominent wetlands which could have been declared as Ramsar sites.

Maharashtra has a number of wetlands among which a few have been declared as Important Bird Areas (IBAs) by BNHS owing to the huge number of birds congregating here. Among the five sites that were already proposed by the forest department, four are IBAs.

The Ramsar convention is an international treaty which focuses on conservation and sustainable utilization of wetlands, recognizing their ecological functions along with economic, cultural and scientific values. The proposed sites easily qualify for being declared as Ramsar sites as they fulfill the nine specific criteria listed by the Ramsar convention.

Thane Creek which was recently declared as a Flamingo Sanctuary by the Government of Maharashtra hosts more than 30,000 – 40,000 flamingos for nearly six months every year, including both Greater and Lesser Flamingos. Besides flamingos the creek is the wintering refuge for many species of migratory birds including large number of Pied Avocets, Black-tailed Godwits, Common Redshanks, stints and sand plovers.

Hatnur dam in Jalgaon district is known to host 20,000 to 32,000 birds during winter, including hundreds of threatened Painted Storks, Black-headed Ibis and other waterbirds.

“India is a signatory to the Ramsar Convention. The declaration of these seven sites as Ramsar sites would help garner global recognition to these wetlands. It would also promote the conservation of the wetlands as a habitat, in turn conserving the varied biodiversity they harbor as well as ensure water security of the region,” said Dr Deepak Apte, Director of BNHS.