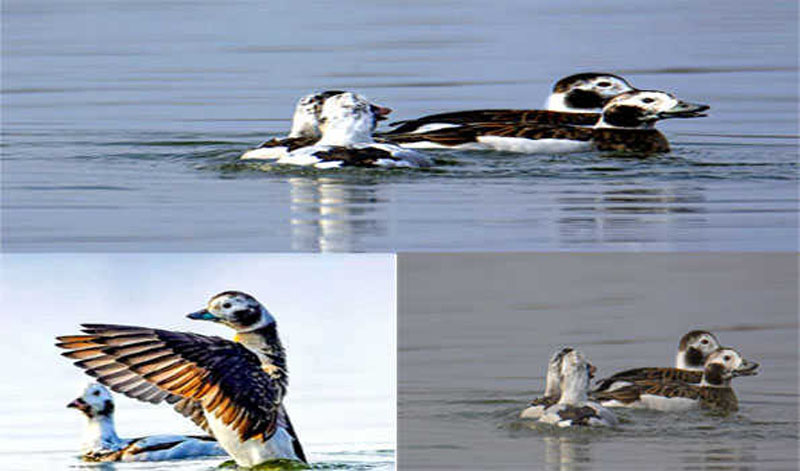 Srinagar: After a long gap of 84-years, a rare specie of long tailed Duck 'Clangula Hyemalis' has been sighted in the Wular Lake in Jammu and Kashmir’s Bandipora district, much to the delight of Ornithologists, nature lovers and bird watchers.

The rare duck specie found in European and American continents has been assessed as highly vulnerable on the International Union for Conservation of Nature (IUCN) Red List, it was sighted in the lake by the officials on January 22, 2023, Coordinator Wular Conservation and Management Authority (WCMA) Irfan Rasool told UNI.

Irfan Rasool said a group of 5 ducks were seen foraging in Wular lake by field official’s of WUCMA and they recorded its details on their field book and captured camera pictures of the ducks.

"The pictures were shared with ornithologists for identification and it was discovered that the birds are in fact, rare migrants known as Long Tailed Duck,"said Coordinator WUCMA".

The last sighting of this bird was reported from Hokersar lake Kashmir in 1939 as mentioned by F.Ludlow in a research paper published in 'Journal of the Bombay Natural History Society', he said and added it is after 84 years that bird has been spotted again in Kashmir and has been documented now.

He said there are only a few sites in India which meet the '1% criteria' necessary for the survival and propagation of this duck species.

Much to the delight of Ornithologists, the eco-restoration of Wular lake has created a ray of hope, as a record number of migratory birds have visited Wular lake this year. The rare sightings have been of Common Pochard, Red crested Pochard and Long tailed Duck apart from other common water birds normally seen in other wetlands, he added.

The Wular lake is one of the largest freshwater lakes of Asia spread out in an area of about 130 Sq kms. The lake faces silt and willow infestation problem which is being mitigated by carrying out large scale earth excavation and willow removals.

As per official figures, an area of 4.5 sqkm has been restored. The project is being executed in a phased manner.

Irfan Rasool said that there is a need to clean 22 Sq km of the lake further which has been filled with silt and willow trees and for that a comprehensive plan has been chalked out which will take at least four to five years to restore the prestigious lake fully.

He said the habitat activities would also take place and eco tourism activities will go on side by side.

The WUCA Coordinator said “although presently we have sufficient funds, the quantum of work is big and it needs more funds which will enable this prestigious Asia's water lake to get fully restored. We are expecting in four to five years the project to be completed”.

Irfan Rasool feels satisfaction with the work so far completed in the lake and said that “it is because of the restoration of the lake that such rare species visited here after a gap of 84-years which is a positive sign”.

He said some more birds including Common Pochard, Red crested Pochard, Common Shelduck, Ruddy Shelduck have been seen in the lake for the first time although they are also visible in other parts of the Kashmir valley.

“We have taken strict measures against the poachers in the Walur Lake and last year in December the poaching unit of Forest Protection force seized a 10 feet long Punt Gun from the banks of Wular lake after poachers had fled from the spot at Watlab area of Sopore.