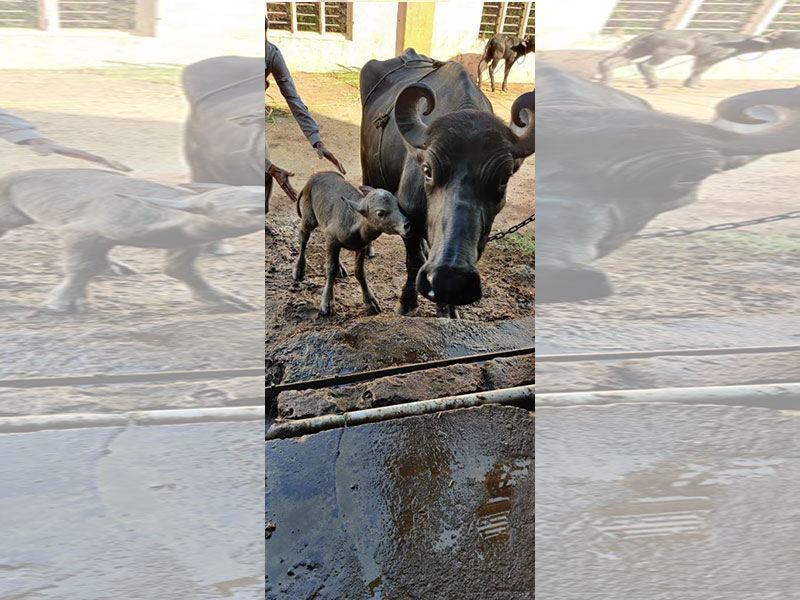 New Delhi: With the birth of the first IVF calf of a Buffalo breed namely Banni in the country, India’s OPU - IVF work has reached to next level.

This first IVF Banni calf is born out of 6 Banni IVF pregnancies established at the doorsteps of a farmer, Vinay . L. Wala of Sushila Agro farms, located at Dhanej in Somnath district of Gujarat.

Prime Minister Narendra Modi had talked about the Banni buffalo breed during his visit to Kutch region of Gujarat on December 15, 2020.

The very next day, i.e. December 16, 2020, Ovum Pick-Up (OPU) and aspiration processes for the in vitro fertilization (IVF) of Banni Buffaloes were planned.

The scientists aspirated 3 Banni Buffaloes of Sushila agro farms of Vinay. L. Wala of Dhanej in Somnath district of Gujarat.

They subjected 29 oocytes (egg cells) to intervaginal culture device (IVC) from these three Banni buffaloes. Total 20 oocytes from one of them were subjected to IVC.

Of five embryos, four were selected for the ET which resulted in 2 pregnancies. From the 4 oocytes of the third donor, 2 embryos were developed and the embryo transfer resulted in one pregnancy, read a government statement.

Overall, 18 embryos were developed from 29 oocytes (62 % BL rate). The ET of 15 embryos resulted in 6 Banni pregnancies (40 % Pregnancy rate). Of these 6 pregnancies, the very first IVF Banni Calf is born today. This is the first Banni Buffalo IVF calf in the country.

Both the government and the scientist fraternity see a great potential in the field of IVF of buffaloes and are striving hard to improve cattle wealth in the country.