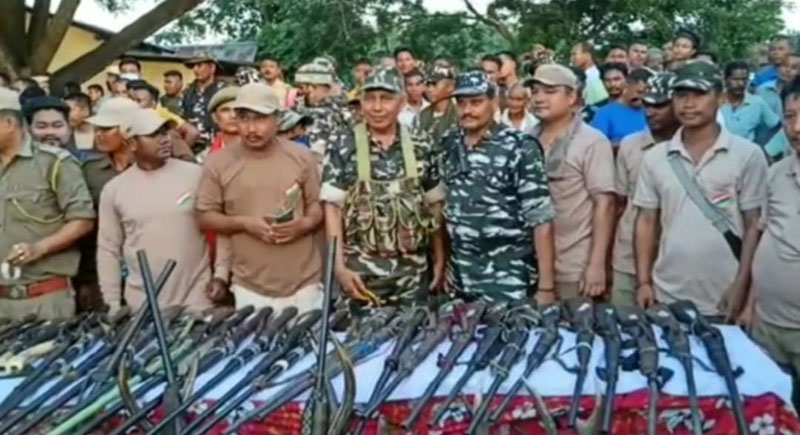 Assam: 57 poachers surrender along with arms in Kokrajhar

Guwahati: As many as 57 persons, who were involved in destruction of forests, killing animals, are now coming out to protect nature, environment and wild animals.

40-year-old Matio Narzary is one among 57 poachers who surrendered before the authorities of Bodoland Territorial Council (BTC), police and forest department officials in Assam’s Kokrajhar district on the day when the entire world was celebrating the World Rhino Day.

He said, “Now we are realizing that, this is our nature, environment and we have needed to protect it.”

Matio Narzary, a resident of Janaligaon area near newly created Raimona National Park in Assam’s Kokrajhar district, was involved in poaching activities in past two decades.

“In past times, I killed many elephants, tiger, deer etc and sold the body parts of animals to different customers. They had paid us Rs 40,000-50,000 against elephant ivory, body parts of tiger. Not only me there are many other persons nearby our village who were also involved in such activities,” Matio Narzary said.

“Now we are realizing that, we have needed to protect our nature, animals. So finally along with 56 others I surrendered before the government authorities,” Matio Narzary said.

Sukumar Basumutary – president of Raimona Golden Langur Eco-Tourism Society said that, in past couple of months they had visited each poacher home and finally they had been able to convince them to surrender. 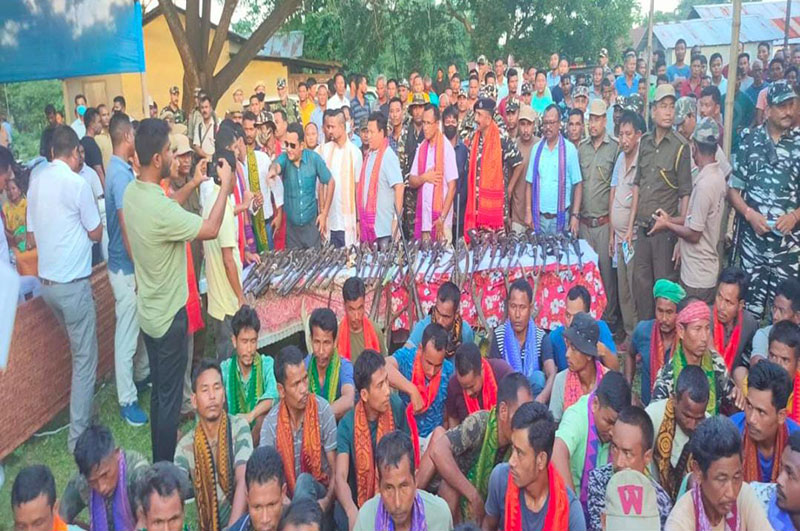 “It was very hard task for us to convince each poacher to come out and involve in conservation actitivities. Finally we success and 57 poachers nearby the Raimona National Park surrendered on Wednesday on the occasion of World Rhino Day,” Sukumar Basuutary said.

The poachers, who were active in the newly created Raimona National Park in Kokrajhar district, had laid down their arms during a ceremonial function held at Mathambill near the national park in presence of BTC chief Pramod Boro.

The poachers had deposited 40 guns, parts of different animals.

BTC chief Pramod Boro said that, the BTC government has extended a one-time financial aid of Rs 50,000 to each surrendered poaches for their rehabilitation.

“We have assured to set up two handloom clusters to 57 poachers who surrendered their arms. Our government is committed to take all possible measures to make poaching free Bodoland Territorial Region,” the BTC chief said.

He tweeted:“Handed over Rs. 50,000 ex-gratia & assured two handloom clusters to 57 poachers who surrendered their arms at a ceremony at Rhaimona National Park on World Rhino Day today. Our govt. is committed to take every possible step to make ‘Poaching free BTR’.”