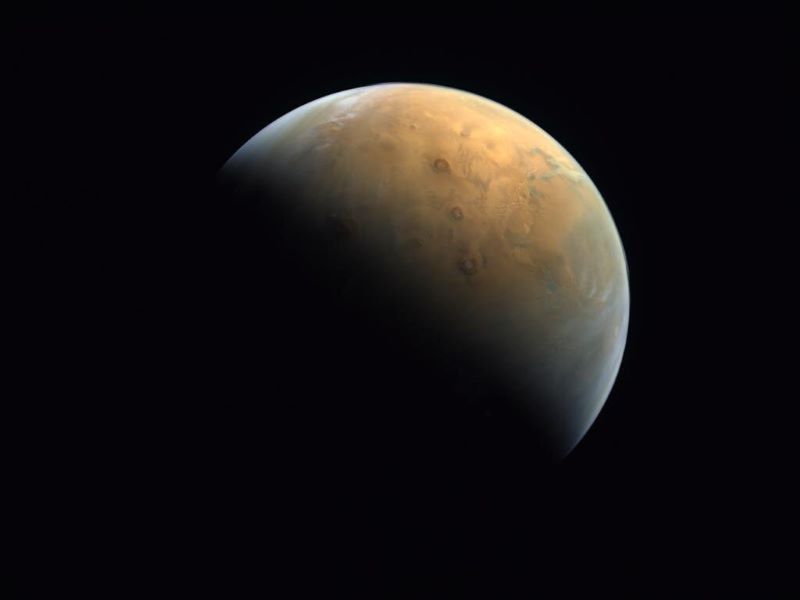 Dubai/IBNS: UAE's "Hope" probe has sent the first image of Mars the national space agency said Sunday, after it entered the atmosphere of the red planet on Tuesday.

The picture "captured the largest volcano in the solar system, Olympus Mons, emerging into the early morning sunlight," the country's national space agency said in a statement, reported AFP.

The image was taken on Wednesday at an altitude of 24,700 km, above the Martian surface at 20:36 GMT on Wednesday, one day after arriving at the planet, it added.

The mission's project manager Omran Sharaf, was at the ground control room in Dubai when the probe sent the first signal after Mars Orbit Insertion, reported Khaleej Times.

The transmission of the Hope Probe's first image of Mars is a defining moment in our history and marks the UAE joining advanced nations involved in space exploration. We hope this mission will lead to new discoveries about Mars which will benefit humanity. pic.twitter.com/TCM5yHTapH

Sheikh Mohammed bin Rashid Al Maktoum, Vice-President and Prime Minister of the UAE and the ruler of Dubai tweeted : The first picture of Mars captured by the first-ever Arab probe in history, 25,000 km above the Red Planet's surface

The first picture of Mars captured by the first-ever Arab probe in history, 25,000 km above the Red Planet's surface pic.twitter.com/Qgh2Cn3JPF

According to Khaleej Times, the probe will collect more than 1TB of new data fromnow until April 2023, including the first-ever complete picture of the Martian atmosphere, by monitoring weather changes throughout the day during all seasons, famous, massive dust storms that have been known to engulf the Red Planet, study the link between weather change and atmospheric loss, a process that may have caused the Red Planet’s surface corrosion and the loss of its upper atmosphere.

UAE also aims to inspire the youth of the region with this mission and aims to share its findings with 200 scientific and educational institutions around the world, Khaleej Times report stated.