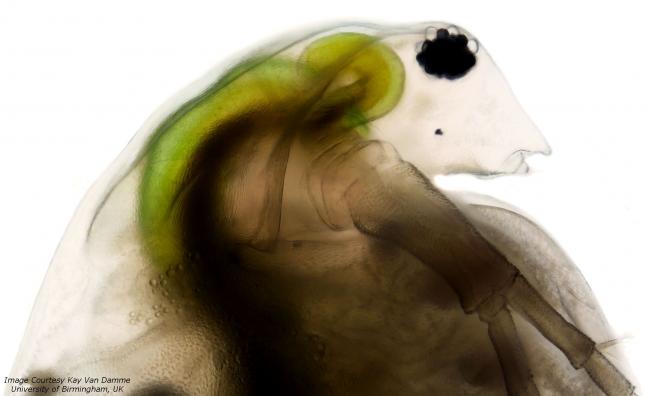 India Blooms News Service | | 22 Dec 2014, 08:08 pm
#Water fleas prepared for trip to space, # Water fleas
New Delhi, Dec 22 (IBNS) Scientists at the University of Birmingham in the UK are preparing water fleas for their trip to the International Space Station (ISS), where they will be observed by astronauts.

These water fleas come from a lake close to the University and are the first animals from UK waters to go into space.

They are currently being prepared for their transit to the US and their flight into space.

This is part of a schools’ educational science project by the International Space School Education Trust and Mission Discovery, in coordination with different institutes like King’s College London and University of Birmingham.

The idea to send water fleas – or Daphnia – to space has been thought up by students from Rhondda Cynon Taff (Wales) and their project was selected at the end of the Mission Discovery programme at King's College London by a team of scientists led by NASA Space Shuttle Commander Ken Ham.

The scientists are particularly interested to know how the animals adapt to their new weightless environment, for example, whether their swimming patterns change, whether the animals seem to be stressed, and how their reproduction is affected.

Kay Van Damme from the University of Birmingham’s School of Biosciences, said: "Little is known of Daphnia in zero gravity. Their swimming behaviour in space can teach us how they experience gravity on Earth and their reproduction is a good indicator of stress. By understanding the health of water fleas in orbit, we can assess their use as models for human health under the same conditions, and their use for setting up simple ecosystems that can survive long space travels."

In preparation for the flight, scientists at Birmingham have to ascertain how much algae the animals will need to feed on while they are at the space station and also if they can survive in the cold temperatures they will be exposed to on their journey.

Together with scientists at King’s College London, they are also preparing the astronaut manifest, which will detail the experiment.

Once they have arrived at the ISS, the astronauts on board will carry out regular observations of the water fleas, recording their behaviour each day by noting down their movement patterns and taking photographs through a special camera attached to a microscope on board.

Julie Keeble from Kings College London, who leads the Mission Discovery experiments for this mission, said: "It is such a privilege to work with winning Mission Discovery pupils to enable their experiments on Daphnia to be carried out on the International Space Station. The opportunity for these pupils to have their experiments developed in collaboration with world-leading scientists is inspirational. The knowledge and enthusiasm of the Daphnia research team in Birmingham has been pivotal in ensuring that success of this experiment aboard the International Space Station."

Chris Barber, Director the International Space Station Educational Trust (ISSET), said: "It is great that the Mission Discovery programme has not just given boys and girls the amazing opportunity of having their ideas carried out in space by astronauts and the brilliant experience of working with world class scientists at the University of Birmingham and King’s College London, but has also enabled Birmingham to provide the first UK water animals to venture into space. At ISSET we have for many years utilised space exploration to encourage the NASA ‘you can do it spirit’ in our young people, but it is truly a first for us to extend this to include space travel for other forms of life from the Midlands."