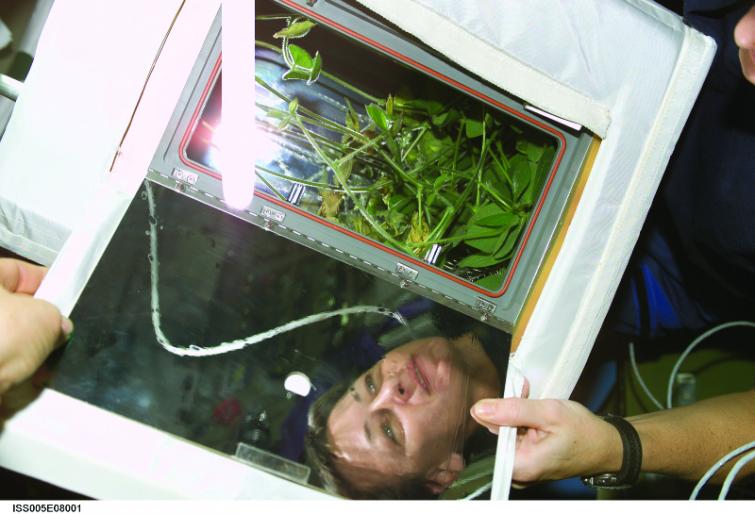 Plant growth on the International Space Station has global impacts on Earth: NASA

Washington/IBNS: Understanding the effects of gravity on plant life is essential in preparing for human exploration beyond low-Earth orbit. The ability to produce high-energy, low-mass food sources during spaceflight will enable the maintenance of crew health during long-duration missions while having a reduced impact on resources necessary for long-distance travel.

The Advanced Astroculture(ADVASC) investigation, led by Weijia Zhou, Ph.D., formerly of the Wisconsin Center for Space Automation and Robotics, University of Wisconsin-Madison, explored the benefits of using microgravity to create custom crops that can withstand the inhospitable climates of space, can resist pestilence, and will need less volume in which to grow.

ADVASC was performed over several ISS expeditions where it grew two generations of Arabidopsis thaliana (i.e., a rapidly growing, flowering plant in the mustard family that has been grown on many space missions), and soybean plants from seed to seed in space using the ADVASC payload––an autonomously operated plant growth unit.

The ability to grow plants from seeds through several generations has proven to be challenging in space and is critical in developing hardware and operational concepts to take human explorers farther beyond low-Earth orbit, read the NASA website.

While serving as a unique plant-growth chamber, the ADVASC hardware design has also contributed to national security, cancer-fighting pharmaceuticals and educational tools for students. ADVASC’s novel air scrubber was designed to remove ethylene from the chamber atmosphere to increase longevity of the produce.

Ethylene––a naturally occurring, odorless, colorless gas given off by plants––hastens the ripening of fruits and the aging of flowers, thus encouraging decay. In closed growing environments such as a spacecraft or terrestrial greenhouse, ethylene builds up quickly. As a result, plants mature too fast.

Removing ethylene, therefore, is important to preserving crops not just in space, but also on Earth, where grocers and florists have an interest in longer product shelf life.

The ethylene-reduction device, also called the ethylene “scrubber,” draws air through tubes that are coated in thin layers of titanium dioxide. The insides of the tubes are exposed to ultraviolet light, which creates a simple chemical reaction that converts the ethylene into trace amounts of water and carbon dioxide, both of which are actually good for plants.

KES Science & Technology Inc., a Georgia-based company specializing in sustaining perishable foods, licensed the ethylene-scrubbing technology from the University of Wisconsin. KES partnered with Akida Holdings, of Jacksonville, Florida, which now markets the NASA-developed technology as Airocide. According to the company, Airocide is the only air purifier that completely destroys airborne bacteria, mold, fungi, mycotoxins, viruses, volatile organic compounds such as ethylene, and odors. The device has no filters that need changing and produces no harmful by-products, such as the ozone created by some filtration systems.

These units in walk-in coolers can preserve freshness of produce during storage and transport, increase safety in food preparation areas, kill bacterial contaminants in flowers, and protect against spoilage and contaminants.

Units also have been deployed to India and the Gulf Cooperation Council, which includes the countries of Bahrain, Kuwait, Qatar, Oman, Saudi Arabia, and the United Arab Emirates. In these areas, where refrigerated trucks carry groceries from rural farmland to towns miles away, the unit preserves freshness and prevents food spoilage.

The units also operate in doctors’ clinics, operating rooms, neonatal wards, and waiting areas, an often overlooked location rife with germs and bacteria such as respiratory influenza or mycobacterium tuberculosis, and which are frequented by people with compromised immune systems.

Units made operating rooms safer for all inhabitants by removing harmful bacteria such as methicillin-resistant Staphylococcus aureus and vancomycin-resistant Enterococcus, and the fungi Penicillium and Aspergillus. In addition to eliminating virtually all known airborne germs and diseases, the technology reduces the burden on high-efficiency particulate air filters and laminar flow environments.

Adaptions for use in everyday living environments include eliminating mold, mildew, germs and unwanted odors in hotel rooms and offices, where illnesses caused by airborne organisms can lower productivity. Airocide even offers a consumer line that makes the same technology used on the space station available in homes to help eliminate bacteria, mold and fungi as well as allergens such as dust and dander, and potentially harmful particulate matter.