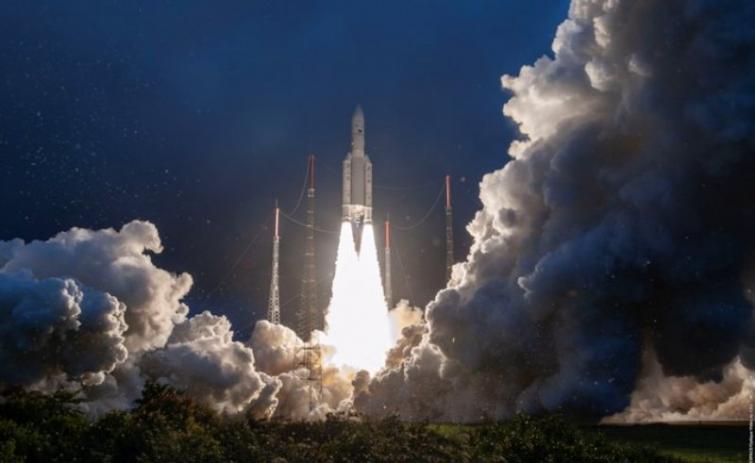 New Delhi/IBNS: In yet another achievement in India's space journey, the country's latest communication satellite GSAT-30 was successfully launched from the Spaceport in French Guiana on Friday.

The launch vehicle Ariane 5 VA-251 lifted off from Kourou Launch Base, French Guiana at 2:35 am IST carrying India’s GSAT-30 and EUTELSAT KONNECT for Eutelsat, as scheduled.

After a flight lasting 38 minutes 25 seconds, GSAT-30 separated from the Ariane 5 upper stage in an elliptical Geosynchronous Transfer Orbit, ISRO said in a statement.

With a lift-off mass of 3357 kg, GSAT-30 will provide continuity to operational services on some of the in-orbit satellites. GSAT-30 derives its heritage from ISRO’s earlier INSAT/GSAT satellite series and will replace INSAT-4A in orbit.

ISRO’s Master Control Facility (MCF) at Hassan in Karnataka took over the command and control of GSAT-30 immediately after its separation from the launch vehicle. Preliminary health checks of the satellite revealed its normal health.

In the days ahead, orbit-raising manoeuvres will be performed to place the satellite in Geostationary Orbit (36,000 km above the equator) by using its on-board propulsion system.

During the final stages of its orbit raising operations, the two solar arrays and the antenna reflectors of GSAT-30 will be deployed.  Following this, the satellite will be put in its final orbital configuration.

The satellite will be operational after the successful completion of all in-orbit tests.