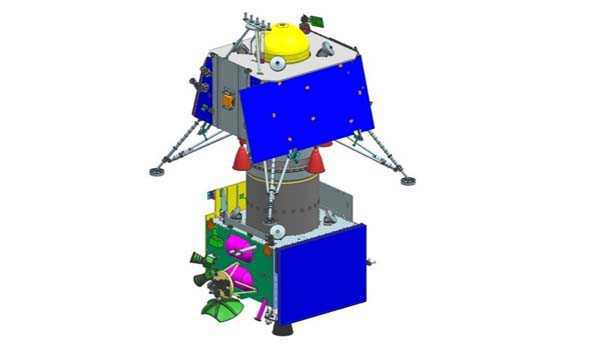 Bengaluru, Jun 12 (UNI) Embarking on the most challenging programme in India’s Space history, Indian Space Research Organisation (ISRO) would be launching a fully indigenous Chandrayan II Moon Mission from its Spaceport at Sriharikota on July 15.

The Spacecraft that includes a moon arbiter satellite, a lander and a rover that will explore the surface of the Moon to find minerals and water on the Earth’s only satellite, will be launched using Geo Stationary Launch Vehicle (GSLV) Mark III at exactly 2.51 AM on the launch date.

In its 15 minute mission GSLV Mk III will hurl Chandrayaan 2 satellite into the deep space and later the spacecraft would be manoured in a eleptical orbit around the Earth and later taken to moon orbit before lander descends on either September 6 or 7.

Briefing newspersons here on Wednesday, ISRO Chairman K Sivan said the lander would make the final descent on the Moon’s surface from a 30 km height in what he called the most terrifying moments for the space agency as it was first such complex mission it was attempting.

‘’We are going to use same strategy as successful Chandrayaan-1 to reach the Moon but soft landing will be the biggest challenge we will face,’’ he said.

Dr Sivan said the mission was being accomplished with a lower cost as the satellite itself costed Rs 603 crore and the GSLV launch vehicle another Rs 375 crore. The total weight of the spacecraft will be 3.8 tonnes. This include the 650 kg orbiter.

He said the Lander Vikram, named after Father of India’s Space programme Vikram Sarabhai would send first pictures within 15 to 20 seconds of its landing on Moon and the Rover, which is named as Pragyan, would send pictures 20 minutes later.

The life span of the Rover will be one ‘Moon Day’ that is equivalent of 14 earth days and the arbiter would be revolving around the Moon for one full year.

After the launch, the composite structure or the Orbiter that carries the Lander and Rover on its head will use five orbit raising maneuvers for 16 days. The Transular burns will take the satellite closer to Moon, after leaving the Earth’s orbit, and cover roughly 3.5 lakh kilometers in a travel time of five days, the ISRO Chief said.