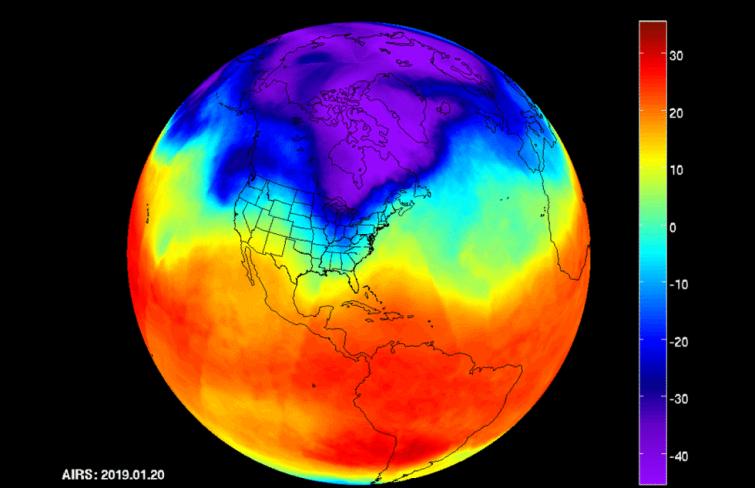 NASA's AIRS captures polar vortex moving in over US

Washington, Feb 1 (IBNS): The U.S. Midwest has been gripped by the lowest temperatures it has seen in years. An unusually cold Arctic air mass, called a polar vortex, is responsible for the severe temperatures, which in many areas have plunged well below 0 degrees Fahrenheit (-18 degrees Celsius).

NASA's Atmospheric Infrared Sounder (AIRS) instrument aboard the Aqua satellite captured the polar vortex as it moved southward from central Canada into the U.S. Midwest from Jan. 20 through Jan. 29, read the NASA website.

The polar vortex is responsible for a number of deaths, disruptions to services, and energy outages in the affected areas.

AIRS, in conjunction with the Advanced Microwave Sounding Unit (AMSU), senses emitted infrared and microwave radiation from Earth to provide a three-dimensional look at Earth's weather and climate. Working in tandem, the two instruments make simultaneous observations down to Earth's surface.

With more than 2,000 channels sensing different regions of the atmosphere, the system creates a global, three-dimensional map of atmospheric temperature and humidity, cloud amounts and heights, greenhouse gas concentrations and many other atmospheric phenomena.

Launched into Earth orbit in 2002, the AIRS and AMSU instruments are managed by NASA's Jet Propulsion Laboratory in Pasadena, California, under contract to NASA. JPL is a division of the Caltech in Pasadena.