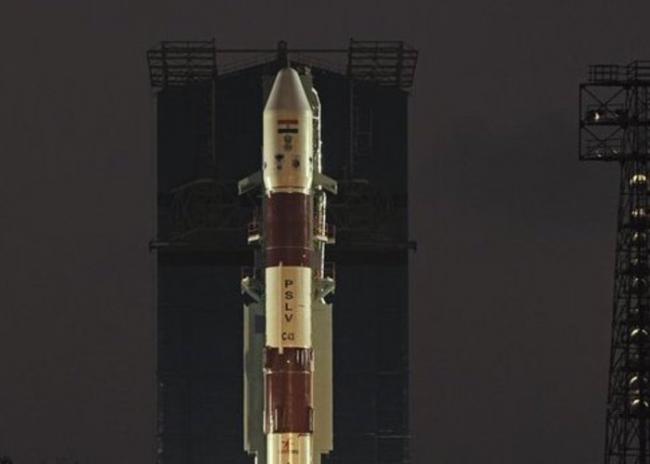 The PSLV-C43 lifted off at 9:57:30 (IST) from the First Launch Pad and injected India’s Hyper-Spectral Imaging Satellite (HysIS) into a 645 km sun-synchronous polar orbit 17 minutes and 19 seconds after the lift-off.

Later, 30 foreign satellites were injected into their intended orbit after restarting the vehicle’s fourth stage engines twice. The last satellite was injected into its designated orbit 1 hour and 49 minutes after the lift-off.

After separation, the two solar arrays of HysIS were deployed automatically and the ISRO Telemetry Tracking and Command Network at Bengaluru gained control of the satellite.

The satellite will be brought to its final operational configuration in the next few days.

HysIS Project Director Suresh K. said that the satellite is performing normally after the launch.

HysIS is an earth observation satellite built around ISRO’s Mini Satellite2 (IMS-2) bus weighing about 380kg. The mission life of the satellite is five years.

The primary goal of HysIS is to study the earth’s surface in both the visible, near infrared and shortwave infrared regions of the electromagnetic spectrum.

Data from the satellite will be used for a wide range of applications including agriculture, forestry, soil/geological environments, coastal zones and inland waters, etc. HysIS had the company of one micro and 29 nano-satellites from eight countries, including Australia (1), Canada (1), Columbia (1), Finland (1), Malaysia (1), Netherlands (1), Spain (1) and USA (23). The total weight of these satellites was about 261.50 kg. Satellites from Australia, Columbia, Malaysia and Spain were flown aboard PSLV for the first time. These foreign satellites launched are part of commercial arrangements between Antrix Corporation Limited and customers.

Congratulating the ISRO scientists after the successful launch of PSLV C-43, ISRO Chairman K. Sivan said it is a very proud moment for the nation as the HysIS was indigenously designed and built.

“HysIS is a state-of-the-art satellite with many indigenous components developed by SAC, Ahmedabad and SCL, Chandigarh,” he said.

Sivan said the main purpose of the HysIS is to exactly identify the objects on the surface of the earth with high precision and resolution.

“HysIS will start sending images from the fifth day of its injection. With HysIS, we have 47 operational satellites that are active now in their orbits, meant for applications like communications, earth observation, scientific studies and navigation,” he added.

Sivan said that the team has achieved another spectacular mission 15 days after the successful GSLV-MkIII/GSAT-29 launch. “Today once again we have proved our excellence,” he said.

Mission Director Shri R. Hutton termed the launch as a grand and marvellous one with clockwork precision.

“We have used a lighter version of PSLV today. It has once again proven its capabilities to launch multiple satellites into different orbits,” he said.

Thursday’s was the 45th flight of PSLV and 13th one in the Core Alone configuration. So far, the PSLV has launched 44 Indian and nine satellites built by students from Indian universities.

The vehicle has also launched 269 international customer satellites. In the last PSLV launch on September 16, PSLV-C42 had successfully launched two commercial satellites from UK-based Surrey Satellite Technology Limited. Dr Sivan thanked the foreign countries for posing faith in India to launch their Satellites. “Our customers are very happy that their satellites are precisely delivered into orbit,” said Dr Sivan.

Dr K. Sivan said in the month of December ISRO has planned two more launches, - GSAT 11 from French Guiana and GSAT 7A from Sriharikota. Next year, ISRO will have its long expected second mission to moon, Chandrayaan – II, expected in the month of January. “ISRO will launch its heaviest satellite, GSAT-11 on Dec 5, 2018, at 2.08 am from French Guiana and later GSLV-MkII will launch GSAT-7A from Sriharikota in December,” said Dr Sivan. “ISRO has planned twelve to fourteen launch missions in the year 2019, which includes Chandrayaan –II,” he added.

When asked why GSAT-11 is being launched from French Guiana, Director, U.R. Rao Satellite Centre, Shri P. Kunhikrishnan said GSAT-11 weighing 5.86 ton cannot be carried by the GSLV Mk – III which has the capacity to lift only up to four-ton class payloads. Though its capacity is being augmented gradually to carry much heavier satellites, the national space agency has to go in for launches from abroad to meet the current requirement.

Speaking on the Gaganyaan, Sivan said the process is going in the right direction and ISRO is planning to launch the first unmanned mission as a precursor to Gaganyaan by December 2020, followed by one more mission by July 2021.

He further added that ISRO plans to accomplish the manned mission by December, 2021.