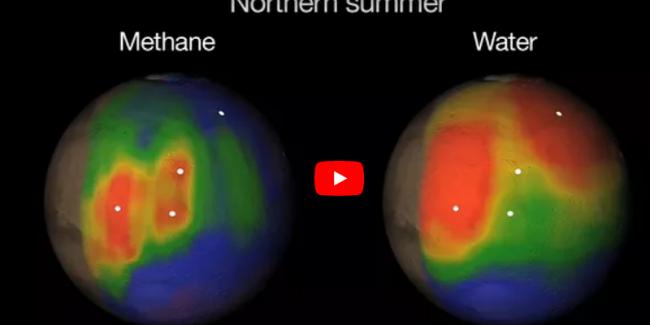 Washington, Feb 21 (IBNS): The planet Mars has fascinated scientists for over a century.

Today, it is a frigid desert world with a carbon dioxide atmosphere 100 times thinner than Earth’s. But evidence suggests that in the early history of our solar system, Mars had an ocean’s worth of water. NASA’s James Webb Space Telescope will study Mars to learn more about the planet’s transition from wet to dry, and what that means about its past and present habitability.

Mars will be targeted as part of a Guaranteed Time Observation (GTO) project led by Heidi Hammel, a planetary astronomer and executive vice president of the Association of Universities for Research in Astronomy (AURA) in Washington, D.C. The GTO program provides dedicated time to the scientists who have worked with NASA to craft the science capabilities of Webb throughout its development. Hammel was selected by NASA as a JWST Interdisciplinary Scientist in 2003. Mars will be visible to Webb from May to September 2020 during its first year of operations, known as Cycle 1.

“Webb will return extremely interesting measurements of chemistry in the Martian atmosphere,” noted Hammel. “And most importantly, these Mars data will be immediately available to the planetary community to enable them to plan even more detailed Mars observations with Webb in future cycles.”

“We are all looking forward to Webb’s observations of Mars. I just know they will be fantastic, with the potential for immediate scientific discoveries,” said Jim Green, director of NASA’s Planetary Science Division, NASA Headquarters, Washington, D.C.

Mars has been visited by more missions than any other planet in our solar system. It is currently orbited by six active spacecraft, while two rovers trundle across its surface. Webb offers several capabilities that complement these up-close missions.

One key asset is Webb’s ability to take a snapshot of the entire disk of Mars at once. Orbiters, in contrast, take time to make a full map and therefore can be affected by day-to-day variability, while rovers can only measure one location. Webb also benefits from excellent spectral resolution (the ability to measure small differences in wavelengths of light) and a lack of interfering atmosphere that plagues ground-based measurements from Earth.

That said, observing Mars with Webb will not be easy. “Webb is designed to be able to detect extremely faint and distant targets, but Mars is bright and close,” explained Geronimo Villanueva of NASA’s Goddard Space Flight Center, Mars lead on the GTO project. As a result, the observations will be carefully designed to avoid swamping Webb’s delicate instruments with light.

“Very importantly, observations of Mars will also test Webb’s capabilities in tracking moving objects across the sky, which is of key importance when investigating our solar system,” said Stefanie Milam at NASA’s Goddard Space Flight Center, Greenbelt, Md. who is coordinating the solar system program with Webb.

Much of the water Mars once held was lost over time due to ultraviolet light from the Sun breaking apart water molecules. Researchers can estimate how much water vanished by measuring the abundance of two slightly different forms of water in Mars’ atmosphere – normal water (H2O) and heavy water (HDO), in which one hydrogen atom is replaced by naturally occurring deuterium. The preferential escape of lighter hydrogen over time would then lead to a skewed ratio of H2O to HDO on Mars, indicative of how much water has escaped into space. Webb will be able to measure this ratio at different times, seasons and locations.

“With Webb, we can obtain a real and accurate measurement of the ratio of H2O to HDO across Mars, permitting us to determine how much water was truly lost. We also can determine how water is exchanged between polar ice, the atmosphere, and the soil,” said Villanueva.

Although most of the water on Mars is locked up in ice, the possibility remains that some liquid water could exist in underground aquifers. These potential reservoirs could even host life. This intriguing idea received a boost in 2003, when astronomers detected methane in the Martian atmosphere. Methane could be generated by bacteria, although it could also come from geological processes. Data from Webb could provide new clues to the origin of these methane plumes.

The James Webb Space Telescope is the world’s premier infrared space observatory of the next decade. Webb will solve mysteries of our solar system, look beyond to distant worlds around other stars, and probe the mysterious structures and origins of our universe and our place in it. Webb is an international program led by NASA with its partners, the European Space Agency (ESA) and the Canadian Space Agency (CSA).