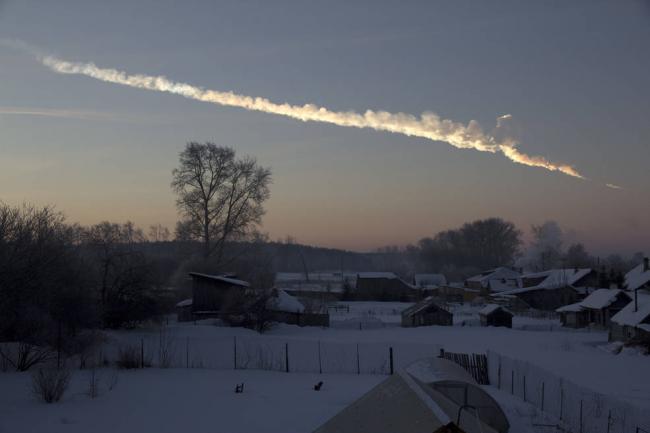 Washington, Feb 16 (IBNS): A blinding flash, a loud sonic boom, and shattered glass everywhere. This is what the people of Chelyabinsk, Russia, experienced five years ago when an asteroid exploded over their city the morning of Feb. 15, 2013.

The house-sized asteroid entered the atmosphere over Chelyabinsk at over eleven miles per second and blew apart 14 miles above the ground.

The explosion released the energy equivalent of around 440,000 tons of TNT and generated a shock wave that blew out windows over 200 square miles and damaged some buildings.

Over 1,600 people were injured in the blast, mostly due to broken glass.

“The Chelyabinsk event drew widespread attention to what more needs to be done to detect even larger asteroids before they strike our planet,” said NASA Planetary Defense Officer Lindley Johnson. “This was a cosmic wake-up call.”

Coincidentally, on the same day as the Chelyabinsk event, the United Nations Committee on Peaceful Uses of Outer Space Working Group on Near-Earth Objects was meeting in Vienna to finalize a recommendation to the U.N. on how to defend Earth from possible asteroid impacts.

One result of this meeting was an endorsement by the U.N. General Assembly for the establishment of an International Asteroid Warning Network (IAWN) for worldwide collaboration on the detection and tracking of potential impact hazards and a Space Missions Planning Advisory Group (SMPAG) as a forum for the national space agencies to collaborate on plans for preventing any possible asteroid impact. In January 2014, the IAWN steering committee held its first meeting, and SMPAG met for the first time later that year.

“Thanks to upgraded telescopes coming online in recent years, the rate of asteroid discovery has increased considerably,” said Kelly Fast, manager of NASA’s NEO Observations Program. “Over 8,000 of these larger asteroids are now being tracked. However, there are over twice that number still out there to be found.”At the same time, NASA’s Near Earth Object (NEO) Observations Program was growing in response to increased awareness of asteroid impact risks. The program focuses on finding asteroids 460 feet (140 meters) and larger that represent the most severe impact risks to Earth. The goal of the program is to find at least 90 percent of these asteroids early enough to allow deflection or other preparations for impact mitigation. By January 2018, discovery of near-Earth objects of all sizes had surpassed the 17,500 mark – an 84 percent increase since January 2013.

In January 2016, NASA established a Planetary Defense Coordination Office (PDCO), tasked with ensuring the early detection of potentially hazardous objects – asteroids and comets whose orbits can bring them within about 5 million miles (8 million kilometers) of Earth, and of a size large enough to reach Earth’s surface.

PDCO is responsible for tracking and characterizing any potentially hazardous objects, issuing warnings about potential impacts, and providing timely and accurate communications about any actual impact threat while leading the coordination of U.S. Government planning for a response.

The NEO Observations Program, a primary element of the PDCO, provides data from projects supported by the program to fulfill these responsibilities.

NASA works with the Federal Emergency Management Agency (FEMA) to lead U.S. Government planning for response to an actual impact threat. “We’ve conducted a series of ‘tabletop exercises’ with FEMA and other U.S. government agencies to simulate the events of an impending catastrophic asteroid impact with Earth to increase our emergency preparedness for it, and we’re planning more,” said Johnson. “We also work closely with our international colleagues in the International Asteroid Warning Network and the Space Missions Planning Advisory Group.”

Going beyond simulations, NASA also is undertaking the Double Asteroid Redirection Test (DART), a space-flight mission designed to demonstrate the kinetic-impact technique for nudging an asteroid off a predicted impact course with Earth. Launch is tentatively set for early to mid-2021.

The Planetary Defense Coordination Office also is supporting development of concepts for a space-based asteroid search, detection and tracking mission.

In 2017, the first “test” of a global asteroid-impact early-warning system took place. The observation campaign was conceived and organized by NASA-funded asteroid observers, overseen by NASA, and included participants from the International Asteroid Warning Network and other international partners.

The target of this observing campaign was an asteroid known as 2012 TC4. While scientists knew enough from the short period of discovery observations back in 2012 that it would safely pass Earth this last October, its precise path was uncertain, so it was an ideal target for a planetary defense exercise.

This early-warning-system test went well. Fast noted, “This was a successful real-life exercise for NASA and for the International Asteroid Warning Network, with smooth recovery of the object, precise prediction of the orbit and tracking of the asteroid as it passed about 27,000 miles from Earth’s surface on October 12th.”

While no known asteroid is predicted to be on an impact course with Earth for the next 100 years, the search goes on, and preparations for planetary defense continue. Said Johnson, “We must keep looking for what we know is still out there to be found.”