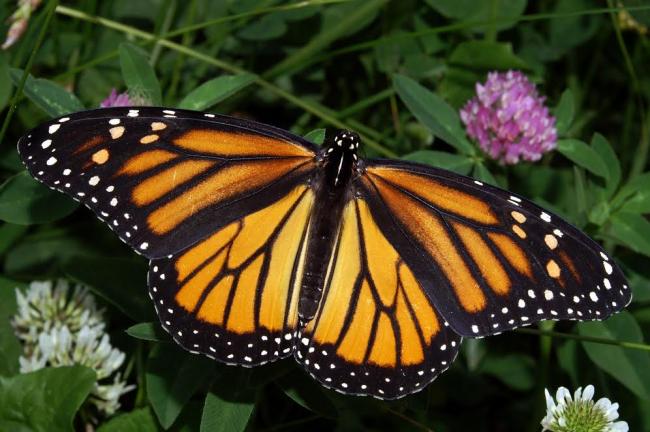 The researchers have collected wing tissue samples from more than 1,000 specimens over a period of nearly 40 years and analyzed their chemical composition, to determine where the butterflies had lived as caterpillars, then looked for patterns in the large data set, ScienceDaily reports said.

Their findings were both surprising and interesting.

"We went into the study expecting that most of the butterflies were going to be coming from the Midwestern U.S. states, and we did find that, but the proportion of butterflies coming out of the Midwest was lower than we thought," said lead author Tyler Flockhart, a Liber Ero postdoctoral fellow in the Department of Integrative Biology at the University of Guelph, ScienceDaily reports said.

The largest percentage of monarchs migrated to Mexico from the American Midwest, but the biologists were surprised to find that the insects' origins were spread fairly evenly throughout Canada and the United States.

The study suggested to spread conservation efforts a little bit wider to ensure that this population doesn’t disappear.

Analyzing more than 1,000 samples, the research team looked at chemical isotope signatures showing where the butterflies were born in the previous summer and fall.

"We didn't see the decline in the proportion of monarchs we expected in the breadbasket of the U.S. -- the Midwestern states -- due to the loss of milkweed, but that could be because monarch numbers dropped across North America," said Flockhart.

Co-author and integrative biology professor Ryan Norris said the study shows monarch conservation efforts must begin immediately throughout North America. He called for better collection and analysis of butterflies in their Mexican overwintering grounds to monitor the effects of conservation efforts.

"We're facing a growing crisis of species extinction, not just with monarchs," said Norris, co-author of the new paper. "While the Midwest U.S.A. is top-priority, effective conservation of monarchs will require initiatives to restore and conserve habitats across the species range, which means there must be coordinated international initiatives," Journal of Analysis and News Reports said.

Most of the older monarch samples were collected by Lincoln Brower of Sweet Briar College, who has studied the butterflies for more than 50 years.

The study was published this month in Global Change Biology.

The North American monarch population has declined by 80 percent over the past two decades, in part due to the disappearance of milkweed, the butterflies' primary food source during the reproductive season. The insect is currently listed as being of special concern in Canada, but following a recent review, the Committee on the Status of Endangered Wildlife in Canada (COSEWIC) has recommended its status be changed to "threatened."