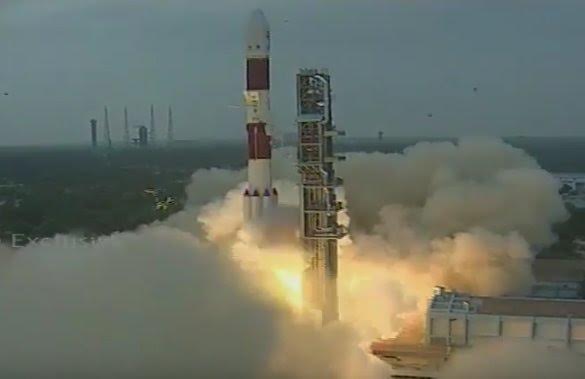 After a flight of 17 minutes 05 seconds, the vehicle achieved a polar Sun Synchronous Orbit of 824 km height inclined at an angle of 98.725 degree to the equator (very close to the intended orbit) and 47 seconds later, RESOURCESAT-2A was separated from the PSLV fourth stage.

After separation, the two solar arrays of RESOURCESAT-2A deployed automatically and ISRO's Telemetry, Tracking and Command Network (ISTRAC) at Bangalore took over the control of the satellite.

In the coming days, the satellite will be brought to its final operational configuration following which it will begin to provide imagery from its three cameras.

The AWiFS provides images with a sampling of 56 metres, a swath of 740 km and a revisit of 5 days whereas the LISS-3 provides 23.5 metre sampled images with 141 km swath and a repitivity of 24 days.

LISS-4 provides 5.8 metre sampled images with 70 km swath and a revisit of 5 days.

The total number of satellites launched by India’s workhorse launch vehicle PSLV including the Wednesday launch of RESOURCESAT-2A has now reached 122, of which 43 are Indian and the remaining 79 are from abroad.