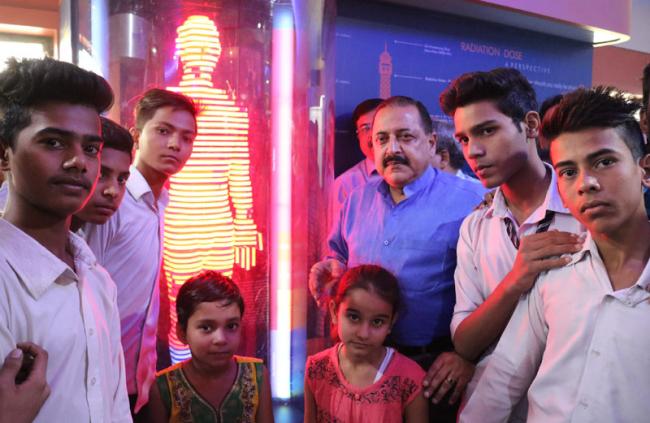 Jitendra Singh, on a visit to the “Hall of Nuclear Power” here today, was interacting with visitors, particularly students, to whom he explained the various glorious facets of India’s nuclear growth.

Jitendra Singh said, the concept of setting up “Hall of Nuclear Power” recently at Pragati Maidan was inspired by the realization that the Department of Atomic Energy did not have its headquarters in the national capital and most of its activities were confined to the Western and Southern parts of India, as a result of which, not much was known about the Department in this part of the country.

He advised the officers accompanying him to send circulars to educational institutions across the country to make a visit to the “Hall of Nuclear Power” a mandatory component of their Delhi itinerary during educational trips and other tours.

As for the country’s nuclear programme, Jitendra Singh said, the Union Government can clearly take the credit of having brought India’s nuclear programme to North and it is only during the last two years that a nuclear plant was set up North of Delhi, at a place called Gorakhpur in Haryana.


Similarly, he said, there are possibilities being explored to set up more nuclear installations in other Northern States including Punjab and Uttarakhand.

With direct and personal patronage from Narendra Modi, India is now among the frontline nations in its nuclear programme and in the years to come, nuclear energy will be a major source of energy for India’s growing needs.

India’s claim to membership of NSG (Nuclear Suppliers Group) is also being increasingly accepted by the world nations, he added.