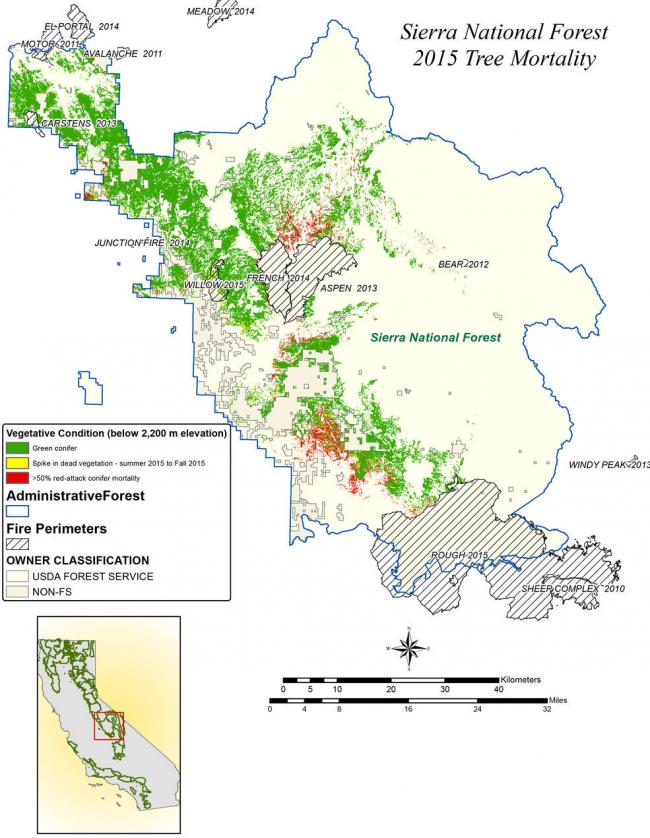 The map will be used to help the U.S. Forest Service assess and respond to the impacts of increased tree mortality caused by the drought, particularly where wildlands meet urban areas within the Sierra National Forest, read the NASA website.

After several years of extreme drought, the highly stressed conifers (trees that produce cones and are usually green year-round) of the Sierra Nevada are now more susceptible to bark beetles (Dendroctonus spp.). While bark beetles killing trees in the Sierra Nevada is a natural phenomenon, the scale of mortality in the last couple of years is far greater than previously observed. The U.S. Forest Service is using recent airborne spectroscopic measurements from NASA’s Airborne Visible/Infrared Imaging Spectrometer (AVIRIS) instrument aboard NASA’s ER-2 aircraft, together with new advanced algorithms, to quantify this impact over this large region of rugged terrain. The high-altitude ER-2 aircraft is based at NASA’s Armstrong Flight Research Center, Edwards, California.

The image was created by scientists at the USFS’s Pacific Southwest Region Remote Sensing Lab, McClellan, California, by performing a time series analysis of AVIRIS images. Scientists evaluated baseline tree mortality on public lands in the summer of 2015 using a machine learning algorithm to classify the AVIRIS measurements as dominated by either shrubs, healthy trees or newly dead conifer trees.

“Reliable and current information is important to address public safety issues,” said Carlos Ramirez, program manager of the USFS’s Remote Sensing Lab in McClellan. “Right now, mapping tree mortality ‘hot spots’ near population centers is the most critical use of the imagery. Computing accurate estimates to meet this need would not be possible without the imaging data acquired by AVIRIS.”

HyspIRI was one of the space missions suggested to NASA by the National Academy of Sciences in its 2007 decadal survey for Earth Science. In the future, HyspIRI could provide spectral and thermal measurements of this type globally for ecosystem research and additional science objectives.