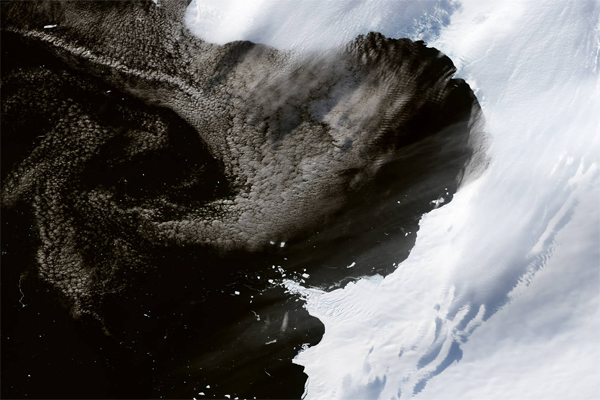 Scientists knew this, but they lacked a full picture of the scale. Now a team of researchers has compiled a Landsat-based data set and found that such losses have been going on for at least the past four decades and along the vast majority of this coast.

“We knew that ice had been retreating from this region recently,” said Frazer Christie, a doctoral candidate at the University of Edinburgh and a co-author of the study. “Now, thanks to a wealth of freely available satellite data, we know this has been occurring pervasively along the coastline for almost half a century.”

The Bellingshausen Sea—named for the Russian Admiral who found the continent in 1820—lies to the west of the Antarctic Peninsula. Examining Landsat data collected between 1975 and 2015, the researchers mapped the approximate locations of “grounding lines” in the ice along the Bellingshausen coast. These lines mark the intersection where glacial ice flowing from the continent is connected, or grounded, to the seafloor. Any ice past the grounding line usually floats on the sea as an ice shelf. When ice is lost to the sea, the grounding line retreats. Meanwhile, the ice loss contributes to global sea level rise.

Christie and colleagues used Landsat data to locate “inflection points” on the surface of the ice that indicate the approximate location of grounding lines below. An inflection point—which can be tricky to detect by an untrained eye—is defined as the last location where the slope of the ice dramatically changes before flattening out into an ice shelf or meeting the sea.

The team combined its Landsat projections of inflection points with radar data from the European Space Agency’s ERS 1 and 2 and CryoSat-2 satellites. They found that the majority of the coastline along the Bellinghausen Sea experienced some grounding line retreat over the past four decades. The findings were published in Geophysical Research Letters.

The widespread retreat has likely been caused by warmer ocean water licking at the undersides of the floating ice near the grounding line—or as the authors write: “an ingress of relatively warm circumpolar deep water.”

The image above shows an area near Eltanin Bay, where the majority of the grounding line is found at the seaward front of the ice. It was acquired by the Operational Land Imager on Landsat 8 on March 2, 2015. The ice loss is most pronounced along the Ferrigno Ice Stream, which was named for Jane Ferrigno, a U.S. Geological Survey scientist who used satellite data (including Landsat) to map Antarctica.

“Our study provides important context for understanding the causes of ice retreat throughout Antarctica as a whole,” said Christie. “We now know West Antarctica has been changing for many decades, so the next challenge is to ascertain the key ice, ocean, and atmospheric factors responsible for such ice losses.”