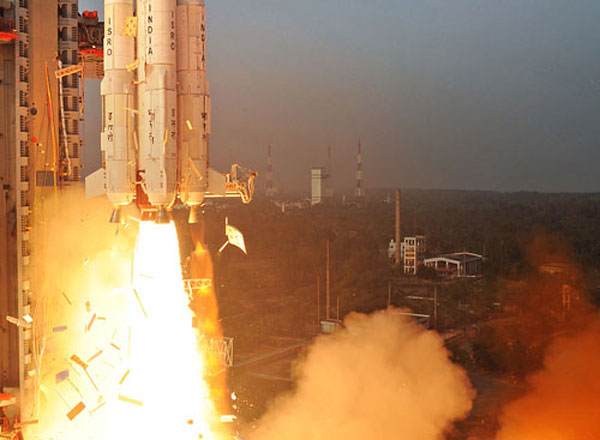 An ISRO press release said the vehicle  successfully launched the 727.5 kg Cartosat-2 series satellite along with 19 co-passenger satellites  from Satish Dhawan Space Centre SHAR, Sriharikota. Lauding ISRO scientists, Prime Minister Narndra Modi said he was totally "immersed in happiness "  This is the 35th consecutively successful mission of PSLV and the 14th in its 'XL' configuration.  The total weight of all the 20 satellites carried on-board PSLV-C34 was 1288 kg. "After PSLV-C34 lift-off at 0926 hrs (9:26 am) IST from the Second Launch Pad with the ignition of the first stage, the subsequent important flight events, namely, strap-on ignitions and separations, first stage separation, second stage ignition, heat-shield separation, second stage separation, third stage ignition and separation, fourth stage ignition and cut-off, took place as planned," the release said. " After a flight of 16 minutes 30 seconds,the satellites achieved a polar Sun Synchronous Orbit of 508 km inclined at an angle of 97.5 degree to the equator (very close to the intended orbit) and in the succeeding 10 minutes, all the 20 satellites successfully separated from the PSLV fourth stage in a predetermined sequence." After separation, the two solar arrays of Cartosat-2 series satellite were deployed automatically and ISRO's Telemetry, Tracking and Command Network (ISTRAC) at Bangalore took over the control of the satellite. ISRO said the  imagery sent by the Cartosat-2 series satellite will be useful for cartographic applications, urban and rural applications, coastal land use and regulation, utility management like road network monitoring, water distribution, creation of land use maps, precision study, change detection to bring out geographical and manmade features and various other Land Information System (LIS) and Geographical Information System (GIS) applications. Of the 19 co-passenger satellites carried by PSLV-C34, two – SATHYABAMASAT weighing 1.5 kg and SWAYAM weighing 1 kg – are University/Academic institute satellites and were built with the involvement of students from Sathyabama University, Chennai and College Of Engineering, Pune, respectively. The remaining 17 co-passenger satellites were international customer satellites from Canada (2), Germany (1), Indonesia (1) and the United States (13). With today’s successful launch, the total number of satellites launched by India’s workhorse launch vehicle PSLV has reached 113, of which 39 are Indian and the remaining 74 from abroad. Expressing his joy, PM Modi tweeted, "20 satellites in a go! @isro continues to break new barriers. Hearty  congratulations to our scientists on the monumental accomplishment."'. "Witnessed with immense pride and delight the brilliant moments on TV & took photos for my Instagram account," he said.     "As a common citizen, was totally immersed in happiness to see our youngsters excelling & taking so much interest in science.   "Saw with immense joy that students from institutions in Pune & Chennai played a role in the making of satellites. This touched me. "Over the years we developed expertise & capability to help other nations in their space initiatives. This is the skill of our scientists," he posted.