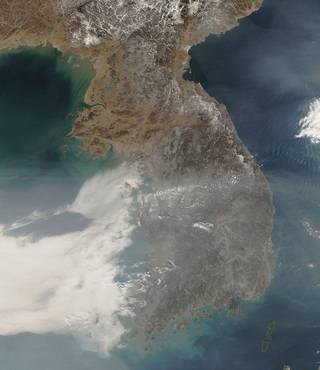 India Blooms News service | | 22 Apr 2016, 10:22 am
#Airborne expedition, # global air quality problem, # NASA
California, Apr 22 (IBNS): NASA has marshalled some top-notch scientific know-how to take on a global public health problem: air pollution. Over the next six weeks, scientists will fan out across and above South Korea seeking to capture the intricate and elusive ebb and flow of changing air quality conditions. The data they collect will be used to help find new solutions to this health threat, not just on the Korean Peninsula but all around the world.

Air pollution is a major global public health problem. The World Health Organization estimates that3.7 million premature deaths annually can be linked to outdoor air pollution.  Exposure to polluted air can cause heart disease, stroke, respiratory problems and cancer. Understanding the complex interplay of factors that influence air quality, including human and natural emissions, transport by winds in the atmosphere, and atmospheric chemistry are important for devising strategies to improve local and global air quality.

“We want to move beyond forecasting air pollution, we want to influence strategies to improve it,” said Jim Crawford, KORUS-AQ principal investigator from NASA’s Langley Research Center in Hampton, Virginia.

The multifaceted suite of data collected during KORUS-AQ will help inform the development of the next-generation of space satellites and ground-based systems for air quality monitoring and forecasting. This information can then be used by decision makers in efforts to improve air quality on local and regional scales.

South Korea is an ideal natural laboratory to carry out air-quality studies. The concentrated population of its capital megacity, Seoul, combined with the presence of rural farming communities throughout the country allow scientists to study both human and naturally produced emissions. South Korea’s location downwind of China also allows scientists to study the long-range transportation of pollution into the peninsula.

KORUS-AQ will be based south of Seoul at Osan Air Base. Two NASA aircraft (the NASA DC-8 and the NASA Beechcraft UC-12B King Air) will join a King Air from Hanseo University in Seosan to carry out coordinated flights over South Korea on 15 days in May and early June.

Flight plans will vary depending on the daily meteorological conditions and will allow the team to study pollution produced locally in the Seoul megacity and surrounding areas, pollution transported from China to the west, and outflow of pollution over the ocean to the east.


The three aircraft carry 37 different instruments that will measure atmospheric gases, particles and solar radiation as well as remote-sensing instruments that will simulate satellite measurements. In order to complete this large-scale international field campaign, a team of 293 scientists, engineers, flight crew and other personnel from the United States, South Korea and 13 other countries are working together.

In addition to aircraft measurements, South Korea has a network of over 300 air-quality ground stations in both urban and rural areas. During the mission, two main ground sites as well as over two dozen other sites will host a suite of NASA/U.S. instruments at locations across South Korea.

The observations from aircraft and ground stations will be compared to and complement measurements taken from Earth-observing satellites and will help inform the development of future air quality satellites. NASA and South Korea are both preparing geostationary air quality satellite missions to launch in the next few years. The NIER Geostationary Environment Monitoring Spectrometer (GEMS) and NASA’s Tropospheric Emissions: Monitoring of Pollution (TEMPO) instruments will provide unprecedented satellite observations of air quality over East Asia and North America, respectively. KORUS-AQ data will help both countries prepare to use the data from these satellites as soon as they are in orbit.

In addition to the airborne, satellite, and ground observations collected during KORUS-AQ, a complementary mission called KORUS-Ocean Color (KORUS-OC) will use two research ships to investigate the waters and air around South Korea. Starting on May 20, the research vessels will take measurements of the ocean’s chemical composition and the daily changes of phytoplankton, the tiny plants at the base of the marine food web that also play a key role in Earth’s carbon cycle.

KORUS-OC researchers will compare these measurements with data from South Korea’s Geostationary Ocean Color Imager (GOCI) satellite, which takes multiple measurements a day to track changes in the color of the ocean – an indication of the concentration of phytoplankton. Scientists on the ships will also be making air quality measurements to complement the KORUS-AQ ground stations. The research aircraft will overfly the ships to help link the satellite and surface measurements.