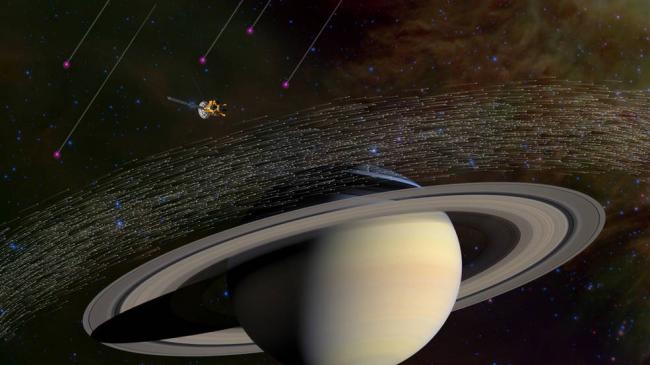 India Blooms News Service | | 15 Apr 2016, 09:57 am
#Saturn Spacecraft , # Interstellar Dust
California, Apr 15 (IBNS) NASA's Cassini spacecraft has detected the faint but distinct signature of dust coming from beyond our solar system. The research, led by a team of Cassini scientists primarily from Europe, is published this week in the journal Science.

Cassini has been in orbit around Saturn since 2004, studying the giant planet, its rings and its moons. The spacecraft has also sampled millions of ice-rich dust grains with its cosmic dust analyzer instrument. The vast majority of the sampled grains originate from active jets that spray from the surface of Saturn's geologically active moon Enceladus, read the NASA website.

But among the myriad microscopic grains collected by Cassini, a special few -- just 36 grains -- stand out from the crowd. Scientists conclude these specks of material came from interstellar space -- the space between the stars.

Alien dust in the solar system is not unanticipated. In the 1990s, the ESA/NASA Ulysses mission made the first in-situ observations of this material, which were later confirmed by NASA's Galileo spacecraft. The dust was traced back to the local interstellar cloud: a nearly empty bubble of gas and dust that our solar system is traveling through with a distinct direction and speed.

"From that discovery, we always hoped we would be able to detect these interstellar interlopers at Saturn with Cassini. We knew that if we looked in the right direction, we should find them," said Nicolas Altobelli, Cassini project scientist at ESA (European Space Agency) and lead author of the study. "Indeed, on average, we have captured a few of these dust grains per year, travelling at high speed and on a specific path quite different from that of the usual icy grains we collect around Saturn."

The tiny dust grains were speeding through the Saturn system at over 45,000 mph (72,000 kilometers per hour), fast enough to avoid being trapped inside the solar system by the gravity of the sun and its planets.

"We're thrilled Cassini could make this detection, given that our instrument was designed primarily to measure dust from within the Saturn system, as well as all the other demands on the spacecraft," said Marcia Burton, a Cassini fields and particles scientist at NASA's Jet Propulsion Laboratory in Pasadena, California, and a co-author of the paper.

Importantly, unlike Ulysses and Galileo, Cassini was able to analyze the composition of the dust for the first time, showing it to be made of a very specific mixture of minerals, not ice. The grains all had a surprisingly similar chemical make-up, containing major rock-forming elements like magnesium, silicon, iron and calcium in average cosmic proportions. Conversely, more reactive elements like sulfur and carbon were found to be less abundant compared to their average cosmic abundance.

"Cosmic dust is produced when stars die, but with the vast range of types of stars in the universe, we naturally expected to encounter a huge range of dust types over the long period of our study," said Frank Postberg of the University of Heidelberg, a co-author of the paper and co-investigator of Cassini's dust analyzer.

Stardust grains are found in some types of meteorites, which have preserved them since the birth of our solar system. They are generally old, pristine and diverse in their composition. But surprisingly, the grains detected by Cassini aren't like that. They have apparently been made rather uniform through some repetitive processing in the interstellar medium, the researchers said.

The authors speculate on how this processing of dust might take place: Dust in a star-forming region could be destroyed and recondense multiple times as shock waves from dying stars passed through, resulting in grains like the ones Cassini observed streaming into our solar system.

"The long duration of the Cassini mission has enabled us to use it like a micrometeorite observatory, providing us privileged access to the contribution of dust from outside our solar system that could not have been obtained in any other way," said Altobelli.

The Cassini-Huygens mission is a cooperative project of NASA, ESA and the Italian Space Agency. JPL, a division of the California Institute of Technology in Pasadena, manages the mission for NASA's Science Mission Directorate in Washington. The Cosmic Dust Analyzer is supported by the German Aerospace Center (DLR); the instrument is managed by the University of Stuttgart, Germany.