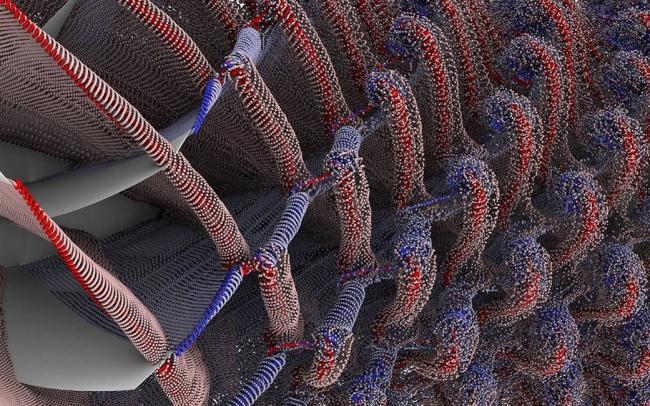 One concept studied at NASA’s Ames Research Center, in California’s Silicon Valley, is the contra-rotating open rotor propulsion system, which has two ultra-thin blades spinning in opposite directions on the same shaft, similar to the blades on a giant kitchen blender.

"These contra-rotating blades rotate around the outside of a turbofan jet engine, like that commonly used in modern airliners. This unique design allows air to flow more efficiently through the turbofan blades to improve flight performance, reduce carbon emissions and decrease blade rotation noise," the NASA website said.

For the past year, researchers at the NASA Advanced Supercomputing (NAS) facility at Ames have produced first-of-a kind simulations of sound produced by air – aeroacoustics – to reliably predict noise sources for contra-rotating open rotors.

The image was generated from a computer simulation of a contra-rotating, open-rotor design in which red particles are “released” on the upstream blades, blue on the aft blades.

The simulations and results matched closely with the wind tunnel test results for sounds produced by the rotating blades.

The analysis requires a massive amount of computing power and time. Currently, the NAS team is researching ways to speed up the simulation and analysis process and cut down on computing resources needed to design planes that are more Earth-friendly.