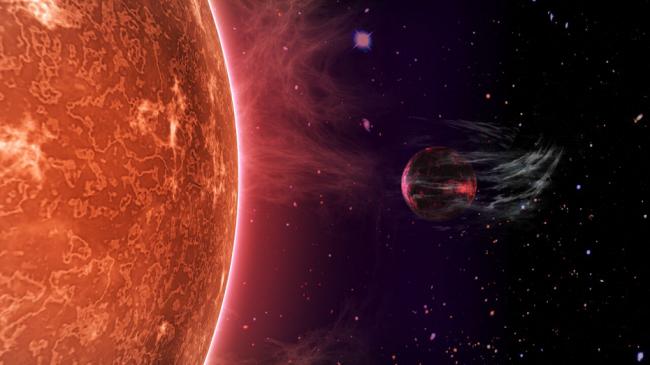 India Blooms News Service | | 11 Apr 2016, 11:17 pm
#Hot super Earths stripped by host stars, # Cooked, # planets shrink due to radiation
Kolkata, Apr 11 (IBNS) Astrophysicists at the University of Birmingham have used data from the NASA Kepler space telescope to discover a class of extrasolar planets whose atmospheres have been stripped away by their host stars, according to research published in the journal Nature Communications on Monday.

According to the study, planets with gaseous atmospheres that lie very close to their host stars are bombarded by a torrent of high-energy radiation. Due to their proximity to the star, the heat that the planets suffer means that their 'envelopes' have been blown away by intense radiation. This violent 'stripping' occurs in planets that are made up of a rocky core with a gaseous outer layer. The scientists used asteroseismology to characterize the stars and their planets to levels of accuracy not achieved before for these systems. Asteroseismology uses the natural resonances of stars to reveal their properties and inner structures. The results of the study have important implications for understanding how stellar systems, like our own solar system, and their planets, evolve over time and the crucial role played by the host star. Guy Davies, from the University of Birmingham's School of Physics and Astronomy, said, "For these planets it is like standing next to a hairdryer turned up to its hottest setting. There has been much theoretical speculation that such planets might be stripped of their atmospheres. We now have the observational evidence to confirm this, which removes any lingering doubts over the theory." Davies added, "Our results show that planets of a certain size that lie close to their stars are likely to have been much larger at the beginning of their lives. Those planets will have looked very different." Scientists expect to discover and characterize many more of these 'stripped systems' using a new generation of satellites, including the NASA TESS Mission which will be launched next year. Image: Peter Devine.