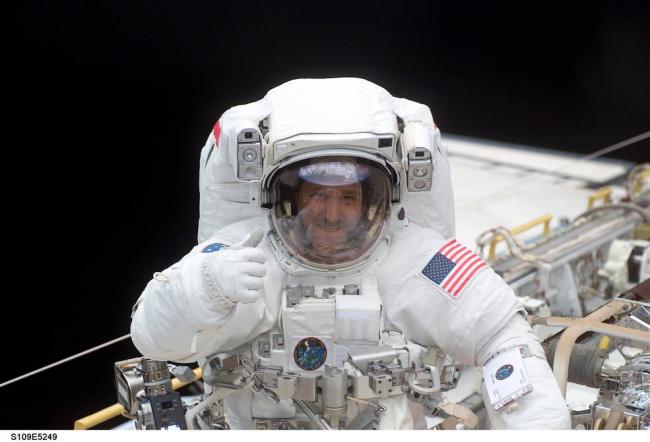 Grunsfeld has directed NASA’s Science Mission Directorate as associate administrator since 2012, managing more than 100 science missions -- many of which have produced groundbreaking science, findings and discoveries.

“John leaves an extraordinary legacy of success that will forever remain a part of our nation’s historic science and exploration achievements," said NASA Administrator Charlie Bolden. “Widely known as the ‘Hubble Repairman,’ it was an honor to serve with him in the astronaut corps and watch him lead NASA's science portfolio during a time of remarkable discovery. These are discoveries that have rewritten science textbooks and inspired the next generation of space explorers."

Geoff Yoder, currently the directorate’s deputy, will serve as acting associate administrator until a successor is named.

“After exploring strange new worlds and seeking out new life in the universe, I can now boldly go where I’ve rarely gone before – home,” said Grunsfeld. “I’m grateful to have had this extraordinary opportunity to lead NASA science, and know that the agency is well-positioned to make the next giant leaps in exploration and discovery.”

Notable science achievements under Grunsfeld’s leadership include the Curiosity rover Mars landing in 2012 – and its remarkable discoveries about the habitability of ancient Mars – and the July 2015 New Horizons Pluto flyby, completing the initial reconnaissance of the solar system.

These and other projects have laid the foundation for future missions to better understand how Earth is changing.

Grunsfeld has also been a strong advocate for research with suborbital rockets, high-altitude balloon flights and CubeSats, to enable great science and train the next generation of explorers.

Preparations are well underway for a host of other missions and activities that will continue Grunsfeld’s work. These include the first U.S. mission to return a sample of an asteroid, the first mission to look for signs of life on Jupiter’s moon Europa, a mission to study the sun closer than ever before, participating in a national space weather strategy, and constructing the next rover to Mars, scheduled to launch in 2020.

Additionally, NASA’s fleet of robotic spacecraft are exploring the solar system and beyond, revealing the workings and beauty of the universe, while discovering thousands of new worlds.

This pioneering work will continue with the launch of the James Webb Space Telescope in 2018, and the Wide-Field Infrared Survey Telescope.

Grunsfeld, a fierce proponent of science education and five-time space shuttle astronaut, was the lead spacewalker during the last Hubble Space Telescope servicing flight in 2009, which successfully upgraded the observatory to the apex of its scientific capability.

He’s also the last human to touch the iconic telescope. In April 2015, Hubble celebrated 25 years of operations, vastly outperforming its planned lifetime of 15 years. In 2015, Grunsfeld was inducted into the U.S. Astronaut Hall of Fame.