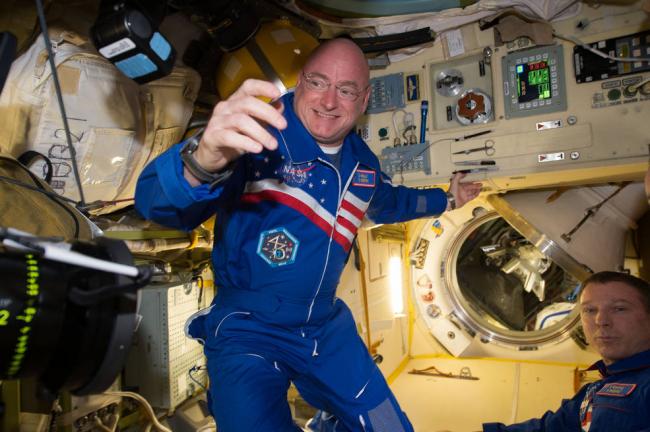 Kelly is scheduled to return to Houston approximately 24 hours after landing back on Earth in Kazakhstan, at about 11:45 p.m. EST (10:45 p.m. CST) Wednesday, based on current landing and transportation plans. NASA Television will broadcast Kelly’s arrival back on U.S. soil after a record-setting stay in space for a NASA astronaut.

Second Lady of the United States Dr. Jill Biden, Assistant to the President for Science and Technology Dr. John P. Holdren, NASA Administrator Charles Bolden, and Kelly’s identical twin brother and former NASA astronaut Mark Kelly will be in Houston to welcome Kelly home. The event will be pooled press only.

Media will have an opportunity to speak with Kelly on Friday. NASA TV will air briefings at 1 and 2 p.m., from NASA’s Johnson Space Center in Houston.

At the 1 p.m. briefing, key members from NASA’s science community will discuss the research accomplishments and the next steps for the more than 400 experiments that took place during Kelly’s year in space.

The briefing participants are:

At 2 p.m., Scott Kelly will share his personal perspective on the mission and answer questions about his time at the space station.

To participate in the news conferences from a NASA facility, U.S. media must call that location’s public affairs office by 5 p.m. Thursday, March 3. To participate by phone, media must call the Johnson newsroom no later than 15 minutes before each briefing. Those following the briefing on social media may ask questions using the hashtag #askNASA.


He surpassed the previous record for time spent in space by a U.S. astronaut on Oct. 16, 2015. After his return, he will have spent a total of 520 days in space across four space missions.

During the 340 days of this mission – which spanned four space station expeditions – Kelly has participated in a variety of research that will help scientists better understand how the human body reacts and adapts to long-duration spaceflight. That knowledge will play a critical role in future NASA missions deeper into the solar system and on the Journey to Mars, in which a round-trip mission is likely to last 500 days or longer.