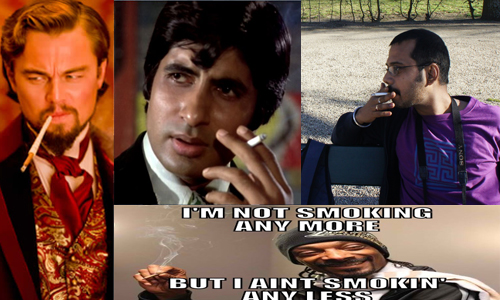 Graphic images may not scare smokers off cigarettes, says study

India Blooms News Service | | 23 Feb 2016, 09:10 pm
#Graphic images ciggerrate, # Ciggerrate, # Smoking
Illinois, Feb 23 (IBNS) Images of disease and suffering should move smokers to kick the habit â€“ at least, thatâ€™s the thinking behind graphic warning labels used on cigarette packages in much of the world, and maybe someday in the U.S.

According to a University of Illinois study, however, “the good intentions of this tobacco control measure may be for naught.”

“What we found is that most people don’t like these warning labels, whether they are smokers or nonsmokers,” said Nicole LaVoie, a doctoral student in communication and the lead author of the study, published online by the journal Communication Research and scheduled for a future print issue.

“It makes them angry, it makes them express negative thoughts about the packaging, that they’re being manipulated,” LaVoie said. “Ultimately, it also makes them think that the source – the government in this case, mandating these labels – is being overly domineering, is being too much in their business.”

What’s more, the strongest response of this kind came from participants who measured high in psychological reactance, a personality trait that makes them more prone to negative and resistant thoughts when they perceive they’re being told what to do, she said.

In some cases, this trait can produce something close to a boomerang effect, according to Brian Quick, a professor of communication and one of three co-authors of the paper, who has studied psychological reactance theory with other health issues. “If these individuals see things as freedom threats, they are going to be more attracted to perform the threatened behavior.”

Since smokers tend to be somewhat higher in this trait, LaVoie said, “we might actually be doing harm to a group that might need the most help if they’re battling an addiction to smoking.”

The participants in the study were 435 undergraduates between the ages of 18 and 25, with a median age of 20. Smokers were 17.5 percent of the sample and nonsmokers (no smoking within the previous month) were 82.5 percent. About two-thirds were female and one-third male; 62.3 percent identified as white and the rest as nonwhite or multiracial.

As part of the study, all participants were given a cigarette package of the same popular brand, along with a questionnaire designed to measure certain personality traits, as well as their reaction to the package. Half of the smokers and half of the nonsmokers were given packages with graphic warning labels with one of seven images, and the other half were given packages with a text-only label like the one now in use.

The images had all been approved by the Food and Drug Administration for use on graphic warning labels in the U.S., whenever they go into effect. (That was once scheduled to happen in 2012, following legislation, but the law has since been tied up in the courts.) Among the images were those of diseased lungs, a diseased mouth, a person dying of lung cancer, another afflicted by heart disease or stroke, and a corpse.

Numerous studies in other countries have shown smoking decreasing after the implementation of graphic warning labels, LaVoie said, but in many cases the new labels coincided with other tobacco control measures such as tax increases and smoking bans.

Also, many smokers in some of those countries simply buy and use slip covers that go over the package, she said. They can avoid the images, regain a sense of control and continue to smoke.

That was one reason LaVoie wanted to conduct the study. “We always measure and look at the intended effects, like encouraging people to quit smoking, but sometimes we don’t remember to look at what else these messages are doing that we’re not thinking about, like causing reactance,” she said.

“Our goal is to think about what can we do, what messages can we construct, that are effective for the whole, but also target these groups that are the most in need of help.”