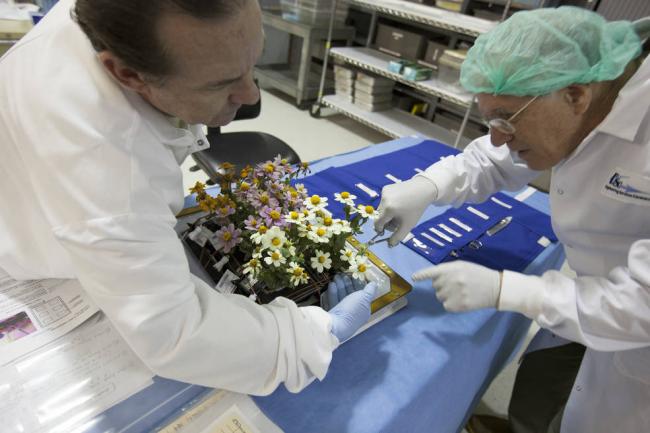 The ground plants didn’t experience some of the same stressors as those grown simultaneously on the ISS — like unexpected fungus growth. However, some of the zinnia plants aboard the floating laboratory pulled through due to collaboration between the astronauts and the ground team at Kennedy. Ultimately, the experiment that went off-script when astronaut Scott Kelly became an autonomous gardener, provided researchers with even more information about how to effectively grow plants in space than they expected.

“I think we’ve learned a lot about doing this kind of experiment. We’re being farmers in space,” Kelly said. “I was extra motivated to bring the plants back to life. I’m going to harvest them on Valentine’s Day.”

Researchers hope to gather good data regarding long-duration seed stow and germination. Also, whether pollen could affect crew health and how having growing colorful flowering plants to grow could improve crew morale

Veggie is the biggest plant/flower experiment to fly on the station. Experiments involving space plants have been a favorite of astronauts, especially those staying in space for long durations like Scott Kelly.


According to behavioral health scientists, part of the pleasure for astronauts is just being involved in meaningful work. But crews in space aren’t the only ones positively affected by growing plants.

“We are sad to see them go,” said Chuck Spern, a project engineer with Vencore on the Engineering Services Contract at Kennedy, “We’ve been caring for them for quite a while. But it’s for the interest of science so we can go to Mars.”

At Kennedy, Spern, removed the Veggie base tray from a controlled environment chamber in the Space Station Processing Facility, and moved it to the Flight Equipment Development Laboratory for harvesting.

The plant pillows containing the zinnia seeds were activated in the Veggie system on the space station and in the ground control experiment on Nov. 13. The plants grew for nearly three months, much longer than the previous red romaine lettuce crop which grew for 33 days.


The flowers were watered and monitored by Kelly and other crew members on the space station, and by Spern and other researchers in the control experiment on the ground.

During the harvest, Spern and John Carver, an integration engineer with Jacobs on the Test and Operations Support Contract, carefully cut the colorful blooms and prepared them for storage. The zinnia flower heads were preserved in three ways. Some of the older plants were harvested for their seeds and air-dried at room temperature to allow the seeds to be tested for germination and regrowth potential. Some of the flowers were frozen at minus 80 degrees Celsius and stored for microbial assessment. Some of them were pressed.

“The flowers going to seed are a good demonstration for sustainable food crops,” said Nicole Dufour, a NASA mechanical engineer and Veggie subject-matter expert. “It’s a good example of starting with seeds and ending with seeds, which is what you need to sustain crop growth.”

The remaining plant material, plant pillows, microbial sampling swabs and water samples will be stored at minus 80 degrees Celsius for analysis.

All of the samples will be compared with plants and plant pillows from the International Space Station, which will be preserved in the same way and returned to Earth on a future Commercial Resupply Services mission.

“We are learning a tremendous amount from Veggie about plants and plant-human-microbial interactions as part of NASA’s Space Biology Program,” Massa said. “And the knowledge gained on food productions helps fill gaps and mitigate food system risks.”

Massa said the zinnia crop will give researchers insights that are valuable for a number of longer duration and fruiting crops, such as tomatoes, peppers, strawberries and other staple crops such as beans and peanuts.

The next Veggie experiment, Veg-3, will be delivered to the space station on a future Commercial Resupply Services mission.

The plant pillows will contain two types of seeds: ’Outredgeous’ red romaine lettuce for the crew to grow and consume, and two other sets containing a small Chinese Cabbage variety called ‘Tokyo Bekana.’

The Veggie system was developed by Orbital Technologies Corp. in Madison, Wisconsin, and tested at Kennedy before flight. Veggie, along with two sets of pillows containing romaine seeds and one set of zinnias, was delivered to the station by SpaceX on the third cargo resupply mission in April 2014.