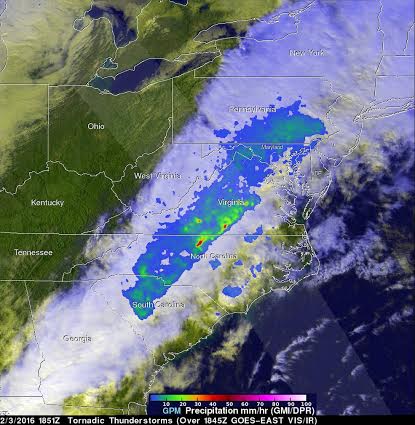 On February 3, 2016 at 1851 UTC (1:51 p.m. EST) the GPM core observatory satellite flew over a line of storms extending from the Gulf coast of Florida through New York state. Tornadoes were spotted in Georgia and South Carolina within this area of violent weather. GPM's Microwave Imager (GMI) and Dual-frequency Precipitation Radar (DPR) instruments measured the precipitation within the area. As the satellite passed above, GPM's radar (DPR) found that one powerful thunderstorm in North Carolina was dropping rain at the extreme rate of 112.96 mm (4.4 inches) per hour. At NASA's Goddard Space Flight Center in Greenbelt, Maryland, data collected by GPM's Radar (DPR Ku band) were used to create a 3-D cross-section through the precipitation within the line of violent thunderstorms. Strong radar reflectivity values greater than 45dBZ (or decibel relative to Z) indicative of moderate to heavy rain, were returned to the GPM satellite from a few intense thundershowers. The dBz is a technical unit used in weather radar. The radar reflectivity (Z) of a cloud is dependent on the number and size of reflectors (like raindrops, snowflakes, hail or graupel). So, the higher the dBZ, the heavier the precipitation. The 45dBZ reading is equivalent to rain falling at 23.7 mm per hour (0.92 inches per hour). NOAA's National Weather Service Storm Prediction Center (SPC) in Norman, Oklahoma reported at least 12 reports of tornadoes in parts of Alabama, Mississippi, Tennessee, South Carolina and Georgia over the severe weather outbreak over Tuesday and Wednesday. Feb. 2 and Feb. 3. The SPC website indicated two tornadoes touched down on Feb. 3 in South Carolina and Georgia. SPC also noted many wind damage reports from this system. NOAA SPC said that an EF0 tornado briefly touched down just north of Farmers Market in Lexington, South Carolina. The tornado's path ran for length 0.6 miles and was between 50 and 75 yards wide. Several cars damaged/destroyed in car storage lot. In Liberty, Georgia, the Fort Stewart emergency management reported a tornado touched down near gate 7 in Fort Stewart around 5:01 p.m. EST and remained on the ground for approximately 10 minutes. In addition to these two tornadoes, SPC cited 20 wind reports. On Feb. 4, 2016 the official Facebook page for the Fort Stewart Hunter Army Airfield stated "As the cleanup continues, large dumpsters will be located around the housing areas to make it easier to discard unwanted items and debris. Most roads are open with the exception of Greene Street which will remain closed for several days. Although most of the roads are opened, please be careful; cleanup crews are still working in and around those areas." The Integrated Multi-satellitE Retrievals for GPM (IMERG) creates a merged precipitation product from the GPM constellation of satellites. These satellites include DMSPs from the U.S. Department of Defense, GCOM-W from the Japan Aerospace Exploration Agency (JAXA), Megha-Tropiques from the Centre National D’etudies Spatiales (CNES) and Indian Space Research Organization (ISRO), NOAA series from the National Oceanic and Atmospheric Administration (NOAA), Suomi-NPP from NOAA-NASA, and MetOps from the European Organisation for the Exploitation of Meteorological Satellites (EUMETSAT). All of the instruments (radiometers) onboard the constellation partners are inter-calibrated with information from the GPM Core Observatory’s GPM Microwave Imager (GMI) and DPR. Image:  NASA/JAXA/SSAI, Hal Pierce