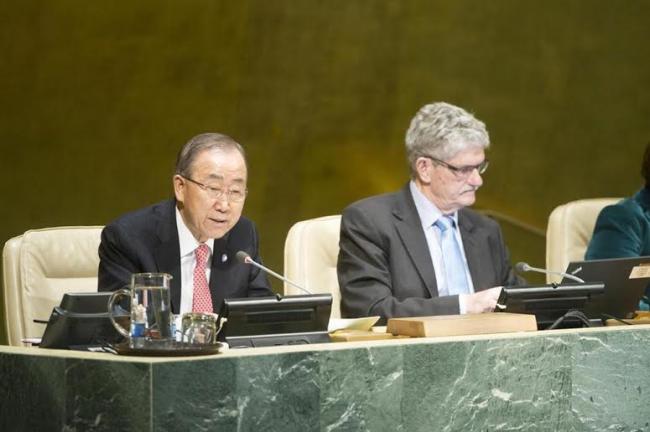 “Information and communication technologies (ICT) have reached into every walk of life. They have sparked innovation and entrepreneurship. They have created new forms of public engagement and economic activity that would have been unimaginable just a few years ago. They help people connect, organize and act towards common purpose,” said Ban in his remarks at the High-Level meeting to review the outcomes of the World Summit on the Information Society, also called WSIS, held 10 years ago. Delegates from Member States and observer entities began meeting today at UN Headquarters for the two-day event, known as WSIS+10 High-Level Meeting, plan to adopt an that identifies emerging trends, fresh priorities and innovations for advancing information and communications technologies. Highlighting the reach of ICT, Ban told all the attendees to aid in maximizing the benefits of ICT for people everywhere. “This High-Level review is timely coming just three months after the adoption of the 2030 Agenda for Sustainable Development. ICTs can be an engine for achieving the Sustainable Development Goals(SDGs). They can power this global undertaking,” said the Secretary-General. However, the UN chief noted that despite the remarkable achievements of the ICT there is a prominent digital divide prevalent, including gender digital divide. “Today, more than 80 per cent of households in developed countries have Internet access. Meanwhile, two out of three households in developing countries do not. Women are half the global population – yet 200 million fewer women than men have access to the Internet,” said Ban, adding that mobile technologies and digital currencies also present huge potential to reach the two billion women and men who are still unbanked around the world. He stressed the need to encourage innovation in financial technology to help promote financial inclusion, enlarge opportunities and grow productive economies. Looking ahead, Ban said work must be undertaken collectively to strengthen trust and promote a global culture of cybersecurity, by enhancing a shared commitment and action by all partners to protect and enhance human rights, while fighting cybercrime and cyber-attacks. “By 2020, it is anticipated that there will be six times as many devices connected on the Internet as people. We must cooperate to consider the implications of this and ensure that the Internet evolves into an inclusive space for the public good. Therefore let us intensify our work to build an open, reliable, safe, secure, stable and inclusive Internet,” the Secretary-General added. Lastly, he stressed that ICTs and the Internet must help in achieving the targets set by the UN and the Member States this year, including climate action, sustainability, prosperity for all nations and communities sharing one planet. “Let us ensure that the results of this High-level Meeting will help us reach our shared destination – a sustainable, equitable and connected world for everyone, everywhere,” Ban concluded. In an opening statement, Mogens Lykketoft, the President of the General Assembly, said ICT has played an increasingly important role in promoting economic and social development, such as enhancing productivity, facilitating trade, creating quality jobs, providing ICT-based services such as e-health and e-learning, and improving governance. “While recognizing these achievements and this great potential, we must not lose sight of the remaining challenges,” he said, echoing the Secretary-General’s concern that various forms of digital divides still exist within and among countries. Moreover, new challenges have emerged relating to Internet stability and security, data ownership and exercise of human rights online. “[The] outcome document [set to be adopted tomorrow] recognizes many of these challenges and the work that lies ahead. It recognizes also the linkages between ICTs and the 2030 Agenda for Sustainable Development,” Lykketoft stated. “The adoption of the outcome document from this meeting will mark the conclusion of the WSIS+10 review process. But it will also mark the beginning of a new phase of the journey – a journey that seeks to fully harness the power of ICT to realize the SDGs and to leave no one behind,” he said. The two-day meeting, convened by Assembly President Lykketoft, in close collaboration with ITU and other UN agencies and programmes such as the UN Education, Scientific and Cultural Organization (UNESCO), the UN Conference on Trade and Development (UNCTAD) and the UN Development Programme (UNDP), is expected to result in a road map for efforts to put ICTs at the heart of new development strategies. Photo: UN Photo/Rick Bajornas