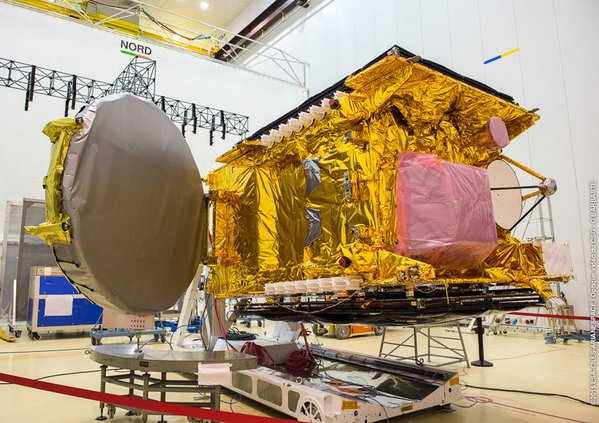 After a smooth countdown lasting 11 hours and 30 minutes, the Ariane 5 launch vehicle lifted off right on schedule at 0304 hrs (3:04 am) IST today. After a flight of 43 minutes and 24 seconds, GSAT-15 separated from the Ariane 5 upper stage in an elliptical Geosynchronous Transfer Orbit (GTO) with a perigee (nearest point to Earth) of 250 km and an apogee (farthest point to Earth) of 35,819 km, inclined at an angle of 3.9 degree to the equator. The achieved orbit was very close to the intended one.

ISRO's Master Control Facility (MCF) at Hassan in Karnataka took over the command and control of GSAT-15 immediately after its separation from the launch vehicle. Preliminary health checks of the satellite revealed its normal health.

In the coming days, orbit raising manoeuvres will be performed to place the satellite in the Geostationary Orbit (36,000 km above the equator) by using the satellite’s propulsion system in steps, read an official statement.

After the completion of orbit raising operations, the two solar arrays and both the antenna reflectors of GSAT-15 will be deployed.

Following this, the satellite will be put in its final orbital configuration. GSAT-15 will be positioned at 93.5 deg East longitude in the geostationary orbit along with the operational INSAT-3A and INSAT-4B satellites.

Later, it is planned to experimentally turn on the communication payloads of GSAT-15. After the successful completion of all the in-orbit tests, GSAT-15 will be ready for operational use.